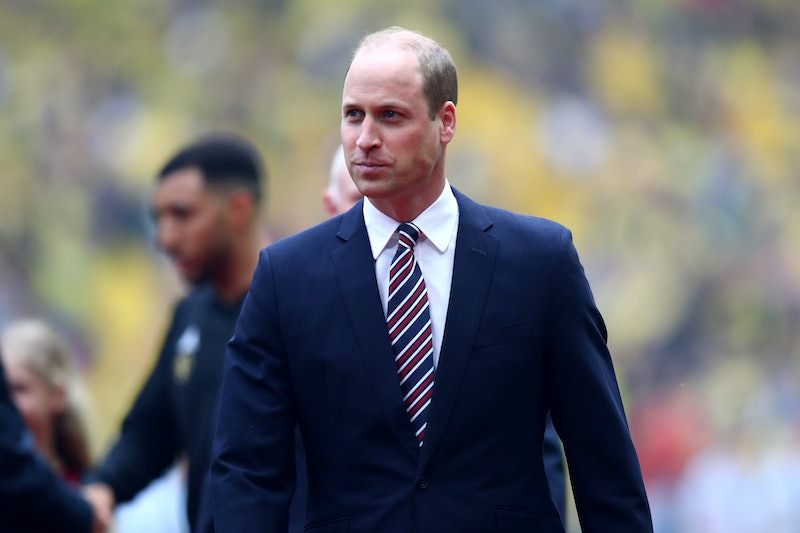 Prince William and Kate Middleton are continuing to prove that they're thoroughly modern royals. According to People, Prince William shared how he would react if his kids came out as gay with a statement that highlighted just how supportive he and Middleton would be.

On June 26, the Duke of Cambridge visited the Albert Kennedy Center Trust to hear more about the issue of LGBTQ homelessness. As People noted, during the conversation, the prince was asked how he would react if one of his children came out. He replied by saying that it's a question he's received in the past, and that it's one that he and Middleton have thought about. Ultimately, William said that it would be "absolutely fine by me" if any of his kids were a part of the LGBTQ community. He said,

“Do you know what, I’ve been giving that some thought recently because a couple of other parents said that to me as well. I think, you really don’t start thinking about that until you are a parent, and I think — obviously absolutely fine by me.”

This is pretty major statement coming from the future King of the United Kingdom, and it's definitely a sign that the British royal family is turning over a new, and more open, leaf.

While William related that he would be nothing but loving and supportive of his children, he did mention that he would have some potential concern. “The one thing I’d be worried about is how they, particularly the roles my children fill, is how that is going to be interpreted and seen,” he said, “So Catherine and I have been doing a lot of talking about it to make sure they were prepared.”

“I think communication is so important with everything, in order to help understand it you’ve got to talk a lot about stuff and make sure how to support each other and how to go through the process. It worries me not because of them being gay, it worries me as to how everyone else will react and perceive it and then the pressure is then on them.”

The royal family has had a very open stance on LGBTQ issues in recent years. While royals such as Princess Diana were open champions of LGBTQ rights, the family has had controversial relationship with the community in the past, as NBC News reported. But, when you take a look at some of the work being done by the royals now, and the recent exciting news regarding the family's first ever same-sex wedding, you can tell that the royal family has evolved and has come to a place of understanding.

Even back in June 2016, William made history when he became the first member of the royal family to appear on the cover of Attitude, a leading gay magazine in the United Kingdom, per ABC News. He told the publication,

"No one should be bullied for their sexuality or any other reason and no one should have to put up with the kind of hate that these young people have endured in their lives."

Based on all of their recent work, and especially William's statements regarding his own family, it's clear that the royal family has no time for any kind of ignorance regarding the LGBTQ community. Instead, the royals are all about leading with nothing but support.