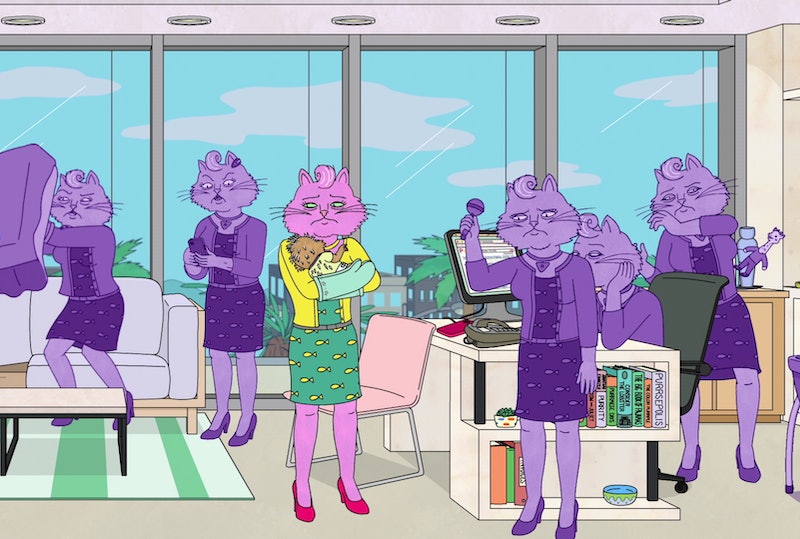 Spoilers ahead through BoJack Horseman Season 6, Episode 2. Allstar agent Princess Carolyn on BoJack Horseman can do it all...until suddenly she can't. In previous seasons, audiences learned that she's had six devastating miscarriages (at least), before finally deciding to adopt in Season 5. This final season of BoJack opens with Princess Carolyn welcoming her adorable new porcupine baby to Hollywoo. The only problem is? She's so worn out that she hasn't even though of a name yet.

It's frankly exhausting to watch the agent go about her day. After her nanny quits, Princess Carolyn is forced to take her yet unnamed baby to work. There, she receives a call from Amanda Hannity, the Manatee Fair reporter, who asks why she isn't at the Women Who Do It All photoshoot.

When the cat says she's too busy doing it all to attend the event, Amanda launches into a cautionary tale about Karen Kitada, a woman who was a successful TV executive before giving birth. "She took three weeks off. Three weeks!" Amanda says. "And when she came back, Tumbleweeds, Crickets — and those are just two of the projects she wasn't offered because the studios were dubious about her 'priorities.'" Do it for Karen Kitada! Amanda pleads.

Carolyn has no choice but to attend the shoot, where other frazzled mothers being interviewed about how they manage all of their responsibilities. "I just think of myself as having multiple apps running at the same time!" a kangaroo babbles, clearly on the verge of a nervous breakdown. "I have my mom app and my career app and my wife app and my yoga body app! And they're all just constantly going — all the time."

Clearly, there's a disconnect between people praising these women "having it all" and understanding what exactly that entails — and at what cost. In addition to taking care of her anonymous baby (she still hasn't had time to think of a name!), Princess Carolyn has to work, help Vanessa Gecko throw a gala (which keeps getting exponentially more complicated), and field calls from BoJack, Mr. Peanutbutter, Todd, and Diane. Not to mention the fact that she's running on almost no sleep and is parenting solo, without a partner to help share the load. All of this leads to a breaking point when she goes to BoJack's rehab facility to pick up Mr. Peanutbutter and is mistaken for a new, drug-riddled client.

Working mothers can likely relate to Princess Carolyn's exhausting schedule. "For many new moms, they feel there is an expectation at work to act as though nothing has changed," Mary Beth Ferrante wrote in a 2018 op-ed for Forbes. "I know I felt that I had to prove to myself and to my team that I had it all together and wouldn't miss a beat. But the reality of being available in the late evenings, on weekends, and what feels like all hours, is already draining before baby. Add sleep deprivation to the mix and it becomes overwhelming."

There's no denying that motherhood is difficult — just ask anyone who's been through it. But it's baffling to watch everyone treat Princess Carolyn as if nothing has changed — especially fellow women like Amanda who know how frazzled she is. It's also clear that "having it all" is a myth, and perpetuating it can be detrimental to individuals' psyches. Then there's the fact that the U.S. is the only developed country not to guarantee paid family leave, according to PolitiFact, causing more undue stress on new parents, which is what makes the story of Karen Kitada's "three weeks!" all the more painful.

In a 2012 op-ed for the Atlantic, Anne-Marie Slaughter wrote:

Millions of other working women face much more difficult life circumstances [than me]. Some are single mothers; many struggle to find any job; others support husbands who cannot find jobs. Many cope with a work life in which good day care is either unavailable or very expensive; school schedules do not match work schedules; and schools themselves are failing to educate their children. Many of these women are worrying not about having it all, but rather about holding on to what they do have.

The worst part is that Princess Carolyn is under the impression that the other moms have it all together (which they clearly don't) and is worried that she doesn't love her daughter enough. Fortunately, Vanessa is able to give her fellow agent some words of wisdom, telling her to approach motherhood just like work. "So now you've got a new job, and it is a ruthless one — and I mean ruthless," she says. "You don't have time to waste second-guessing how you feel about it. You just have to do it the best that you can and know that that's the best you can do."

There's still a long road ahead for Princess Carolyn, but she finally has a spare moment to sit with her baby and come up with a name: Ruthie. And that's good enough for one day.