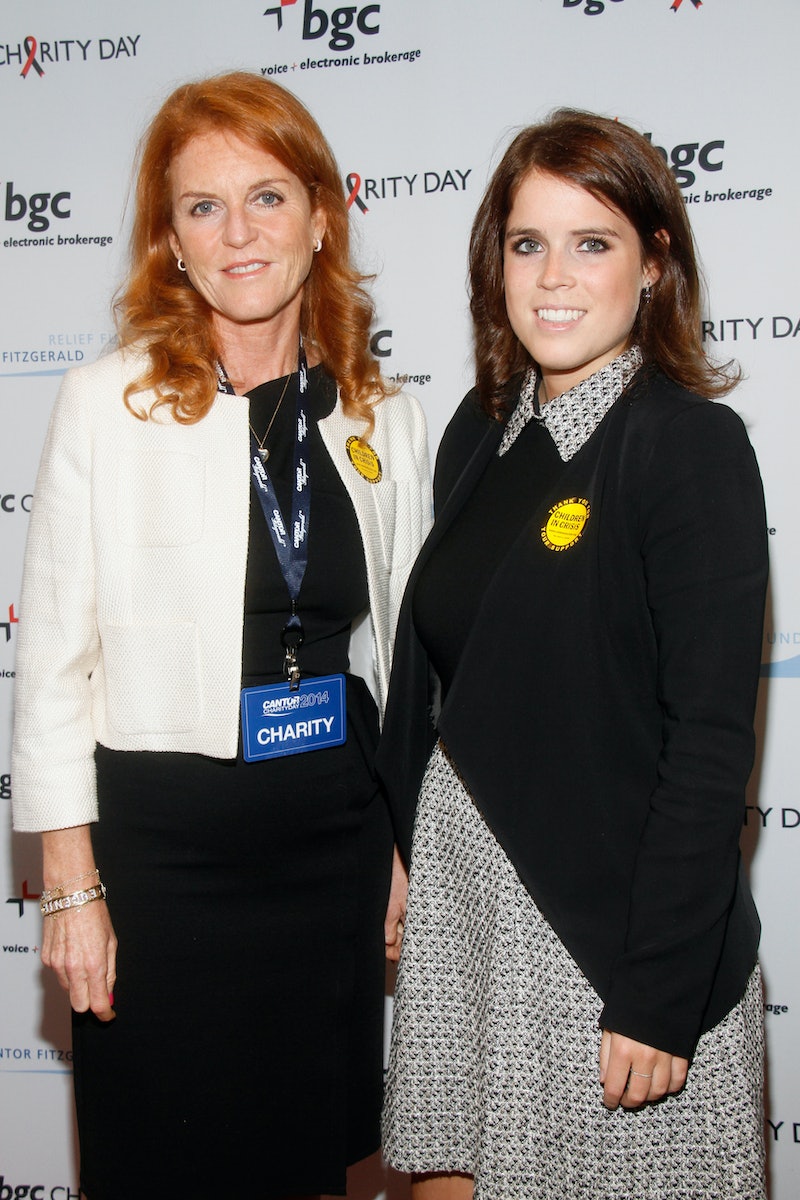 This is one way to shut down rumors about the British royal family. According to Sarah Ferguson, her daughter, Princess Eugenie isn't pregnant. That's right, Ferguson, also known as "Fergie," recently took matters into her own hands by telling a group of reporters that Eugenie and her husband, Jack Brooksbank, are not expecting their first child together.

On July 28, Kelly Lynch, Managing Editor at Dailybreak tweeted a video of Ferguson talking in front of a crowd. As she can be heard saying in the video, "No, she's not pregnant. What else? I'm just going through what the journalists are saying and they're all here, so I just thought I'd fill it in."

According to People, Ferguson's revealing speech, which Lynch captured on camera, happened at a Massachusetts party that was thrown in honor of American businessman Ernie Boch Jr.’s philanthropic work. Ferguson didn't stop there and continued to joke that she still lived with her ex-husband, Prince Andrew, who is Queen Elizabeth II's son. She told the crowd, "Yes, I do live in Royal Lodge with my handsome prince, who is the best-looking prince of the whole darn lot, you know, there you go."

Ferguson continued to be her funny self by adding about Brooksbank, "Jack sells tequila for Casamigos which we love. It makes me even more of a yummy mummy because I just drink the tequila when I go and sell it."

Pregnancy rumors involving Eugenie first started on Twitter in June, as reported by USA Today. Fans wondered if Eugenie was pregnant during Royal Ascot week, a horse-racing event in London, based on her apparently touching her belly a lot and on the shape of her body.

In May, there were even photos of Eugenie that convinced fans she was indeed pregnant. Once again, many assumed the royal family member was expecting a child due to Eugenie touching her stomach and since she was seen wearing a floral pattern. As reported by the Express, "Strong patterns are a known styling technique to distract viewers from the person's figure."

In June, People also reported that Eugenie and Brooksbank, who wed in October 2018, were ready to start a family. Royal biographer Ingrid Seward told the publication that the two wanted to start a family "as soon as they can."

Even though Ferguson said her eldest child with Andrew isn't pregnant right now, she's definitely excited for grandchildren. Prior to Eugenie's wedding, Ferguson told BBC's The One Show in August 2018 (via People) about the possibility of becoming a grandmother, "Excellent! They are thrilled because I write children’s books and I’m a child, I haven’t grown up." She continued, "So they'll just go, 'Here, take [it], Mom!'"

It doesn't appear that Eugenie or the royal family previously commented on the pregnancy rumors. Now, thanks to Ferguson, she's setting the record straight. If or when Eugenie and Brooksbank are ready to welcome their first child into the world, they will most likely announce the exciting news on their own terms, just like many British royal family members would.

More like this
The Queen’s Beloved Corgis Played A Special Role At Her Windsor Service
By El Hunt
King Charles Ensured These Subtle Tributes Were Included In Queen Elizabeth’s Funeral Wreath
By Sophie McEvoy
Camilla Paid Tribute To The Queen In A Heartfelt Video Message
By El Hunt and Sam Ramsden
Will Archie & Lilibet Attend The Queen's Funeral?
By Sam Ramsden
Get Even More From Bustle — Sign Up For The Newsletter