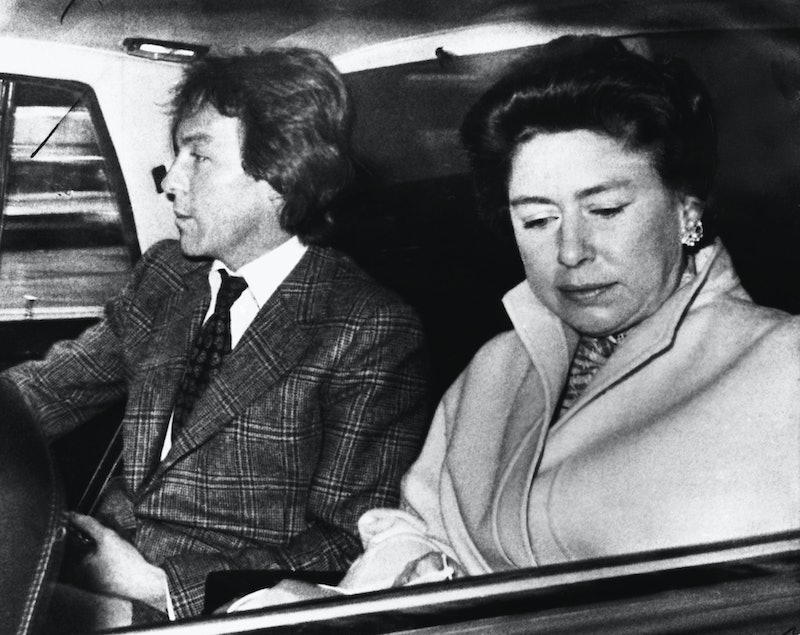 In Season 3 of The Crown, Princess Margaret (played with verve by Helena Bonham-Carter) begins a romance with Richard "Roddy" Llewellyn (Harry Treadaway), a landscape gardener 17 years her junior. As in real life, the affair precipitates the end of her already crumbling marriage to photographer Antony Armstrong-Jones when blurry paparazzi shots of the lovers vacationing on the Caribbean island of Mustique make the tabloid press. But where The Crown offers only a snapshot, there's a movie to be made: Princess Margaret and Roddy Llewellyn's relationship lasted eight years.

As reported by the Telegraph, the pair met in 1973 at the Café Royal in Edinburgh, where they were introduced by Lady Anne Glenconner, who served as Princess Margaret's lady-in-waiting for more than 30 years. Llewellyn remembered that meeting for the rest of his life, remarking in 2002 after Margaret's death, "I discovered a warm and witty woman, possessing a strong sense of duty and dedication to her country's interests, who has honoured me with her friendship since that first house party that was so filled with fun and laughter."

Lady Anne, though, later felt conflicted about making the introduction in light of its thorny aftermath, confessing in a 2018 documentary that the situation "was difficult for the Queen and I felt rather guilty." Llewellyn was not the first of Princess Margaret's affairs, nor was Armstrong-Jones faithful to Margaret throughout their marriage. But the paparazzi photos dismantled what little was left of the facade of a happy family.

After Margaret's separation from Armstrong-Jones was announced in March 1976, the first royal separation since Henry VIII, the press "laid siege" to Llewellyn's farm, compelling him to deliver a public statement: "I am not prepared to comment on any of the events of last week. I much regret any embarrassment caused to Her Majesty the Queen and the royal family, for whom I wish to express the greatest respect, admiration and loyalty." The Palace also issued this terse statement: "The Queen is naturally very sad at what has happened."

As much ruckus as their relationship caused, it wasn't enough to dampen Llewellyn's affection for Princess Margaret. They continued seeing each other until 1981, and though Llewellyn ultimately married another woman and had three children, he always remembered his time with the princess warmly. "I found a fine friend who could steady my restless nature and offer wise counsel," he wrote in an open letter published by the News of the World following Margaret's death in 2002. In fact, some of the details included in The Crown's third season appear to be gleaned from that letter, in which Llewellyn recalls Her Royal Highness donning "a wig to sing a Sophie Tucker red hot momma number."

Eventually, Lady Anne, too, was able to reconcile her misgivings about the role she played in the end of Margaret's marriage, not in the least because of some kind words reportedly offered by a fellow mourner. Said Lady Anne, "After Princess Margaret's funeral, the Queen, she said, 'I'd just like to say, Anne, it was rather difficult at moments, but I thank you so much [for] introducing Princess Margaret to Roddy 'cause he made her really happy.'"