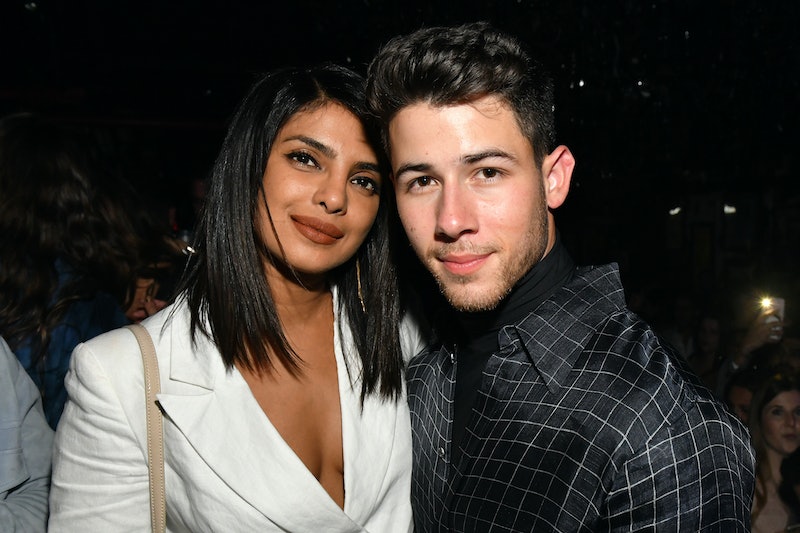 Nick Jonas is ringing in his 27th birthday in style, with a little help from his wife, of course. As she highlighted on Instagram, Priyanka Chopra's birthday post for Nick Jonas features a moving caption, some sweet terms of endearment, and more than a few never-before-seen moments of the couple.

Chopra pulled out all of the stops for her Instagram message in honor of Jonas' birthday. To mark the special occasion, the former Quantico star posted a video tribute that featured so many of his best moments. Not only did it showcase the "Close" singer onstage in his element, but it also revealed some behind-the-scenes moments between the husband and wife pair. Some of those never-before-seen moments were from their show-stopping "Sucker" music video shoot and another was from one of their low-key cooking sessions in which Jonas could be seen making some pasta.

The video also featured plenty of photos of the birthday boy, whether they were with Chopra's mom, Madhu Chopra, or from many of the fun times on the red carpet that he shared with his wife. All in all, the video was filled with some of his best, most adorable moments. And as if the content of the video wasn't enough to make you swoon, the clip was set to the Jonas Brothers' "I Believe," a song about Chopra and Jonas' very own love story, an all too fitting touch on the tribute.

Chopra's caption for the Instagram post was just as sweet as her video. Her caption even featured the nickname she has for Jonas, "Jaan," which is a term of endearment in Hindi that can mean "life, dear, sweetheart, or soul." She wrote,

Of course, Chopra wasn't the only one who took to Instagram to honor the singer a happy birthday. Both of Jonas' elder brothers, Joe and Kevin Jonas, wished him well on his special day. Kevin posted a photo of himself and the 27-year-old from the group's Happiness Begins tour, which he captioned with, "Happy birthday @nickjonas hope today is filled with so much love and awesomeness!!!"

Joe had a more humorous take on his birthday message for his younger brother. He posted a couple of photos of himself and Jonas, including one from the "Jealous" singer's wedding day in which they donned traditional Hindi outfits. But, he also shared a couple of awkward photos of his bro (including an interesting face mash-up of the birthday boy and their brother Kevin?), since that's what siblings are for, after all. He captioned the series, "Happy Birthday to my dude! Love ya man. Stay awesome. Keeping growing. keep making people smile. Here’s a few of my favorite photos. 💜"

From his brothers' meaningful messages to his wife's epic birthday video tribute, there's no doubt that Jonas was feeling all of the love on his special day.

More like this
This Pre-'Love Island' Video Of Olivia & Zara Together Changes Everything
By Bustle UK
Priyanka Chopra & Nick Jonas’ Matching Tattoos Have A Romantic Meaning
By Radhika Menon
Priyanka Chopra Jonas Opens Up About “High Stakes” Birth Of Daughter Malti
By Radhika Menon
Britney Spears Shared The Real Reason She Shut Down Her Instagram Account
By Brad Witter
Get Even More From Bustle — Sign Up For The Newsletter
From hair trends to relationship advice, our daily newsletter has everything you need to sound like a person who’s on TikTok, even if you aren’t.