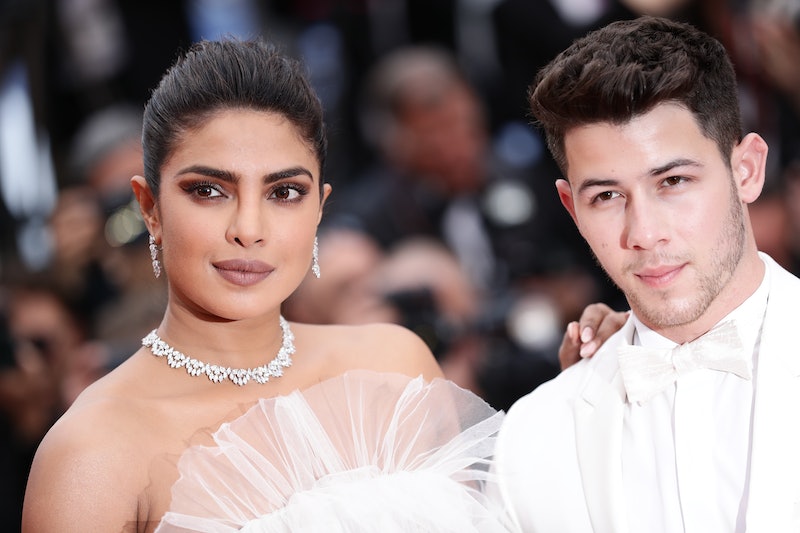 After 10 whole years, the Jonas Brothers dropped their highly anticipated new album on Friday, June 7. Happiness Begins is the first album since the trio’s official reunion as a band, which was announced earlier this year. Among the band’s well-received hits such as “Sucker” and “Cool,” Happiness Begins also features brand-new songs that pay homage to the brothers' respective wives — with one in particular one capturing the hearts of many. Fans are convinced that the Jonas Brothers’ “I Believe” is about Priyanka Chopra, and the internet can’t handle the cuteness.

The most compelling lyrics from “I Believe” that reference Chopra's influence are the following:

And people saying that we move too fast

But I've been waiting, and for a reason

Ain’t no turning back”

With the lyrics “and people saying that we move too fast,” fans strongly believe “I Believe” is in reference to Nick’s whirlwind romance with Chopra. The two tied the knot in December 2018 after their 2017 Met Gala joint appearance resulted in a media frenzy and first sparked dating rumors.

Considering that the reference wasn’t too difficult to piece together, Jonas Brothers fans took to social media to share their overwhelming feels about "I Believe."

And, of course, the crying memes were aplenty.

In the band’s April 25 Billboard cover story, Nick confirmed the inspiration of “I Believe” — as well as the origins for the trio’s other tracks such as “Hesitate.” While Nick teased that “Hesitate” serves as brother Joe’s love letter to his wife — Game of Thrones actor Sophie Turner, who he wed in a surprise Las Vegas ceremony in May — he told Billboard that “I Believe” is, in fact, a reference to his relationship with Chopra.

According to the Nick, the women also served as “informal consultants” on the new music featured in Happiness Begins. “Priyanka and Sophie love pop music and listen to Spotify’s Today’s Top Hits or Apple Music all the time,” he told Billboard. “So they were a really good gauge, like, ‘Does this sound good?’” Well, their consultations certainly paid off. In March, the Jonas Brothers’ comeback single “Sucker” nabbed the No. 1 spot on the Billboard Hot 100, a first for the boy band.

The release of Happiness Begins marks a busy comeback for the three brothers. On Tuesday, June 4, the Jonas Brothers released Chasing Happiness, a documentary with Amazon Prime Video that mapped the trio’s rise to the top to their ultimate split in 2013. Additionally, in May, the band announced their first tour in over a decade, the Happiness Begins Tour, slated to kick off in August and conclude in February 2020. The Jonas Brothers are also slated to release their first memoir, Blood, out on Nov. 12.

Happiness Begins is available to stream now. Between now and August, fans should have plenty of time to memorize the lyrics to “I Believe” or “Hesitate” to croon along to during the Happiness Begins Tour.