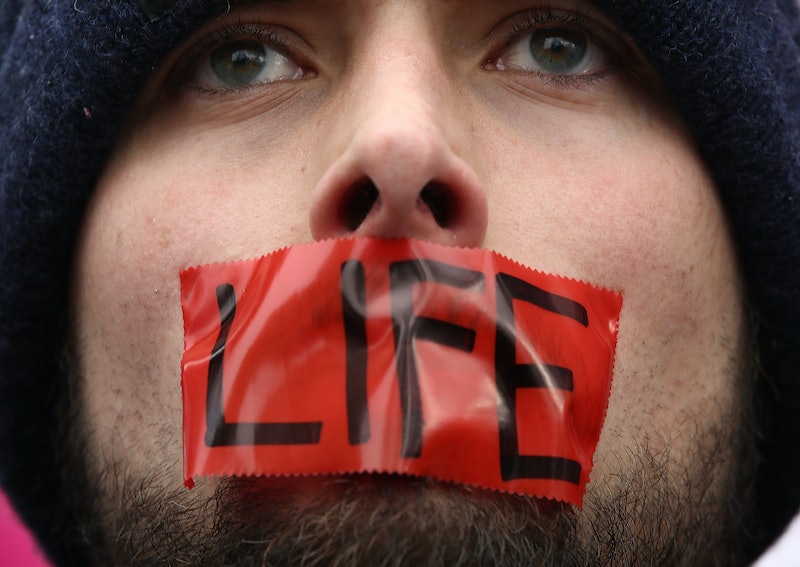 Whose opinion matters most when it comes to whether or not a woman has an abortion? Is it that of the woman whose' physical body, health, education, career, finances, and future (to name only a few things) will be significantly affected or is it that of her male partner? While reproductive rights is undoubtedly an issue directly impacting women, an organizer behind a pro-life event in North Carolina claimed that abortion is really "more of a men's issue" than a women's issue.

"The truth is that this is more of a men's issue than it is a women's issue," Justin Reeder, the founder of the pro-life group Love Life Charlotte, said in a video calling for 1,000 men to protest an abortion clinic in Charlotte, North Carolina on Saturday. "Yes, one out of three women will have an abortion in their lifetime, but it is also one out of three men. We forget about the men so often in this story."

Although Reeder had called for 1,000 men, only an estimated 600 protesters showed up to Love Life Charlotte's "Men For Life Prayer Walk" outside the Preferred Women's Health Center of Charlotte on Saturday, the Charlotte Observer reported. In an video posted to the event's official Facebook page, Reeder claimed it was a man's duty to protect women.

Reeder is certainly not the first person to claim their efforts to restrict a woman's reproductive rights stems merely from a desire to "protect women." For years pro-life legislators across the country have attempted to disguise regulations on abortion providers, also known as TRAP laws, as legislation aimed at protecting the health of women.

It's important to question where the line between so-called "protection" and intimidation falls. According to Preferred Women’s Health Center of Charlotte administrator Calla Hales, pro-life protests often serve to intimidate and harass already vulnerable patients.

For decades male politicians have sought to exert control over women's bodies by enacting legislation aimed at restricting their fundamental right to personal autonomy. And while men can certainly have an opinion in the reproductive rights debate, abortion is undoubtedly a women's issue.