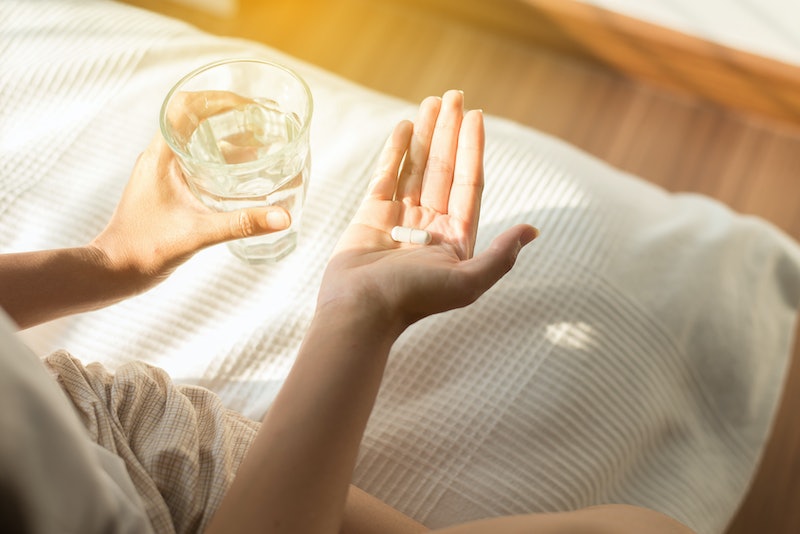 Many of us think of probiotics as a way to boost our gut functioning, and improve our overall health and well-being. And while no supplement can cure all of our issues, taking a good probiotic doesn't hurt, right? Well, according to a team of researchers at the Medical College of Georgia at Augusta University, the way probiotics work might be more complex than previously thought. For some people, probiotic use might contribute to brain fog and bloating by increasing bacteria in the small intestine, and researchers suggest that they might not work well for everyone.

In the small study published in the journal Clinical and Translational Gastroenterology, 22 of the 30 patients studied reported brain fog and problems concentrating, in addition to severe bloating, when taking a variety of probiotics every day. When researchers tested these participants further, they found significant amounts of bacteria breeding in their small intestines, and in some instances, symptoms were so severe that patients were unable to work. The study participants had taken probiotic supplements between a period of three months to up to three years. Some also ate probiotic-rich cultured yogurt regularly. According to a press release on this research, the authors state that this is the first study of its kind to link probiotics with brain fog and bloating. While probiotics can be helpful in many cases, experts say should also be used with caution.

Dr. Howard Franklin, MD, Vice President of Medical Affairs at Salix Phamaceuticals tells Bustle via email that the current research is important because it emphasizes the significance "of the microbiome, and that fact that small intestinal bacterial overgrowth is a real clinical problem."

"Given that probiotics are now [...] added to numerous foods that normally don’t contain probiotics (i.e., prunes or fruit juice with probiotics) and probiotics are now sold in extremely high doses with multiple strains, it’s not surprising that some individuals with potentially overly sensitive gastrointestinal tracts may react with overgrowth and higher levels of lactic acidosis," Dr. Joyce Faraj, a registered dietitian nutritionist at Mountainside treatment center, tells Bustle.

According to the Mayo Clinic, probiotics are good bacteria that populate the lower intestinal tract and promote healthy digestive health. Dietary sources of probiotics include kim chi, sauerkraut, and certain dairy products, and supplements are also often used by those seeking to create better bacteria balance in the gut. But Newsweek reports that, according to the new study, probiotics can cause symptoms like brain fog and bloating if they populate in the wrong part of the GI tract, such as the stomach or small intestine (the upper intestinal tract).

Per the press release, this report is the first to link taking probiotics with brain fog and abdominal bloating. Dr. Satish S.C. Rao, director of neurogastroenterology and the Digestive Health Clinical Research Center at the Medical College of Georgia at Augusta University, was quoted in the press release as saying that “What we now know is that probiotic bacteria have the unique capacity to break down sugar and produce D-lactic acid … if you inadvertently colonize your small bowel with probiotic bacteria, then you have set the stage for potentially developing lactic acidosis and brain fogginess.”

Kirsten Jackson, dietician and representative of the British Dietetic Association told Newsweek that using specific strains of probiotics to target gastrointestinal distress is key to getting the most benefit from taking a supplement. Meaning that some conditions do best with certain probiotic strains, while other gut issues are way more complex than taking probiotics can address.

Further, biochemist Dr. Erika Angle, PhD, tells Bustle via email that, when choosing probiotic supplements, it's crucial to pay attention to your body's reaction to them. "It's so important to understand which probiotics you need [and] take the supplements that target your personal health issues," she says.

"Not all foods or probiotics fit for all individuals, but at this point, we do not know exact strains or doses are best, as it is a rather new and highly complex area of study," Dr. Faraj says, noting more study is needed to understand the link. When it comes to taking probiotic supplements, however, less may be more for some people.