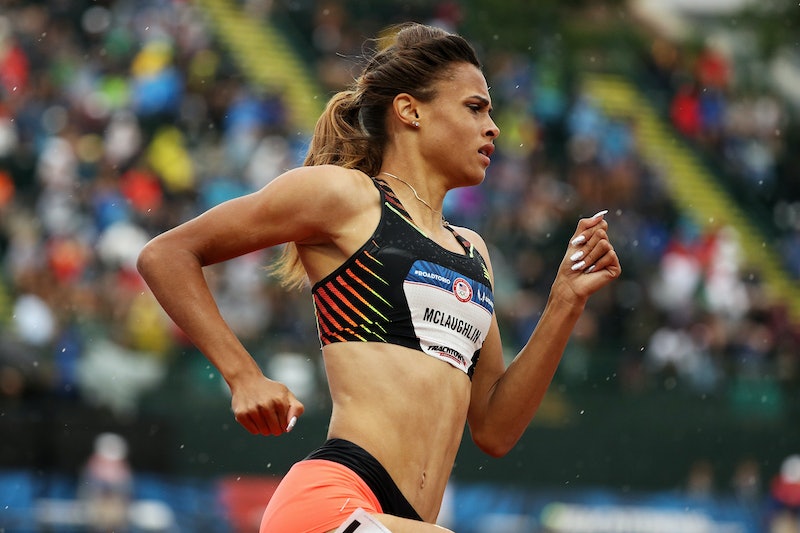 In 1973, the infamous tennis match between Bobby Riggs and Billie Jean King was dubbed the "Battle of the Sexes." Since, America has seen numerous men and women compete on the same court — only in mixed doubles tennis matches, however. While no other professional American sports leagues are mixed-gender, the debate of whether or not men and women should play on the same team has gone on for years. Some argue that professional sports teams should be based on talent verses gender, and the notion of women as "the weaker sex" (explained in 2008's Playing with the Boys) has caused the segregation. Where do athletes stand now? From the 2017 ESPYs red carpet, professional athletes weigh in on the future of mixed gender sports.

Track and field Olympian Sydney McLaughlin says the time is long overdue. "That would be amazing. I feel like there’s such a gap right now and I think that would definitely change things for both sides," says the 17-year-old. "I think it would be fantastic to be able to work with men in sports and have that closer connection instead of having it separate all the time," she says.

Zaza Pachulia of the Golden State Warriors says it's doable — if kids can play together, why can't adults? "I’ve seen kids play together, at five, six, seven," he says. "But in professional sports it’s hard to predict. I see it coming." Others argue that physicality would get in the way.

While the thought of mixed-sex teams does sound incredibly exciting, there are interesting arguments that factor in how men and women naturally perform. Michael Porter, Jr. of the Missouri Tigers puts it simply: "Men and women are built differently, we’re designed differently."

Orlando Scandrick of the Dallas Cowboys dives into how males and females excel in different areas. "Our masculinity kicks in and the things we go though, and places our minds can go athletically, I don’t think a woman’s mind could go there," he says. On the flip side, he argues, "The places that their minds go, like physically when they deliver babies and carry babies, I don’t think our minds could go there."

However, there are a handful who believe certain sports would work better than others for mixed-gender teams — a few name track and basketball, while ruling out heavy contact sports. "There’s a lot of good women basketball players out there. Elena Delle Donne, Candace Parker, those girls can play. Put ‘em out there," says LA Lakers' Corey Brewer.

Plus, each male and female athlete have a unique set of capabilities and talents. WWE star Lana jokes, "If it was a yoga competition, I could definitely hang." Her sidekick Summer Rae chimes in, "I think Serena Williams can hang, I don’t know if I could hang with the boys."

Although the difference in physical build between most men and women is a conversation point, many remain hopeful about the chance to compete with and against the opposite sex. "When it does come to some things, I think women shine differently than men. I think we deserve our spotlight," Summer Rae says. Lana is also optimistic, "The sky’s the limit. We’re constantly evolving and changing, who knows what the future holds," the 32-year-old says.

While the future of mixed-gender sports is uncertain, the thought that both males and females are up for the challenge is certainly an exciting first step.

More like this
On 'The Handmaid’s Tale,' Christine Ko Fights Back
By Gretchen Smail
Jinkx Monsoon Is About To Get Real Sketchy
By Sam Ramsden
The Fashion Blogger Behind "Christian Girl Autumn" Just Dropped A Clothing Line
By Allie Fasanella
Twitter Is Freaking Out Over Rihanna’s 2023 Super Bowl Halftime Show Announcement
By Stephanie Topacio Long
Get Even More From Bustle — Sign Up For The Newsletter