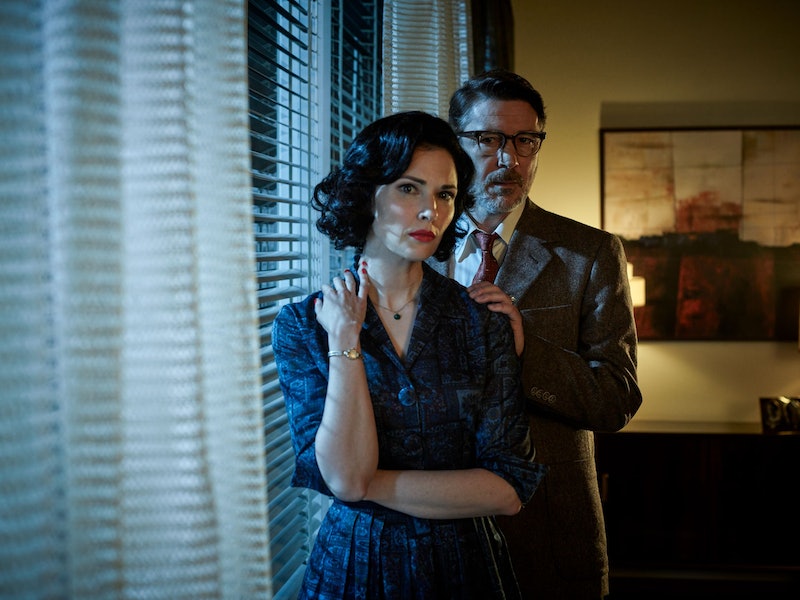 For many, extraterrestrial life falls into the same category as ghosts and goblins: unbelievable. Others believe in the possibility of alien life forms, but refuse to buy into the idea that any have come into contact with our planet. It might be surprising to these skeptics that the government operation in Project Blue Book was real, but it turns out the new History series is deeply rooted in fact.

According to Time magazine, the U.S. Air Force began investigating UFOs after World War II, "as tensions with the Soviet Union fueled both the space race and fears of nuclear apocalypse." Deadline reports that the show is inspired by the work of Dr. J. Allen Hynek, a college professor recruited by the U.S. Air Force to work on Project Blue Book, a series of UFO studies conducted from 1952 to 1969. Also according to the outlet, the operation "researched thousands of cases — more than 700 of which remain unsolved to this day."

All of that mystery-packed history inspired some of Project Blue Book's stars to start researching the real-life events on which it's based. "I'm still shocked and surprised at things that I'm finding out," star Michael Malarkey told Collider. "This has started me down a dangerous rabbit hole of information. Even last night, I was watching a UFO documentary. I've been watching them obsessively since we wrapped. For me, a lot of it is the witness accounts, especially from people who are in high places in the government and the Air Force, and people who are retired and feel like they can actually speak out now more freely, and all of the NSA documents where you can read maybe five words. What the f*ck is that about?"

Of course, as you might imagine, the show takes some creative liberties, but creator David O'Leary told Entertainment Tonight that the production heavily draws from real life. "All the headlines in the script are just real-life headlines," he said. "We try to keep as much of the details of the UFO event as accurate as we can to what was really reported."

According to O'Leary, the strange plot lines and incidents in which they do stretch the truth are all the more realistic because of the history they've drawn upon. "I think that's part of what we want to do, constantly remind people that while we're dramatizing aspects of the show, obviously, for the human storytelling and things like that, all the cases, all the weirdness and all the spookiness is rooted in real-life historical events and real-life reports and physical, tangible things you can find online and in history," he continued.

Blue Book showrunner Sean Jablonski claimed to Variety that the real-life Project Blue Book was created to discredit authentic accounts of unexplained events and "give them alternative facts," even calling it "the original fake news." Hynek similarly criticized the project's credibility, and Jablonski said the show, though fictional, aims to expose these supposed discrepancies. "The series is based in fact," he told Variety. "When you scratch the surface, the conspiracy and truth of what actually happened give you a lot of story to tell."

However the story unfolds, it definitely sounds like it will be a dramatic and twist-filled ride.