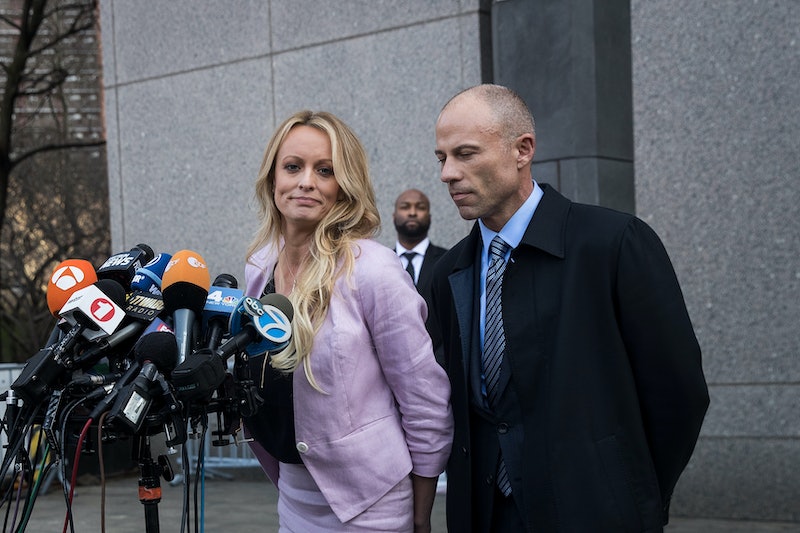 The fight over Stormy Daniels' hush money payment and the criminal case against President Trump's personal attorney Michael Cohen seemed sure to collide this week, but the adult film star and director may not meet with federal prosecutors after all. Daniels' lawyer Michael Avenatti tweeted her meeting was off because the United States Attorneys' office "can't handle a few cameras outside." Bustle has tried to reach the U.S. Attorneys' office for comment.

On Twitter late Sunday, Avenatti argued that likely press attention was the reason for the cancellation and said the office canceled "because the press found out." Avenatti went on to make even stronger accusations against the prosecutors. "If they consider this a big deal, how will they ever bring any serious criminal charges against Cohen et al., let alone handle a trial, in such a high profile matter? We have bent over backwards to accommodate them. This is unheard of. We remain willing to cooperate but something isn’t right..." he wrote on Twitter.

Avenatti also posted the letter he had sent to the U.S. Attorneys' office upon learning of the cancellation of the appointment. He tweeted the file uploaded to Dropbox. Avenatti told one of the prosecutors that Daniels' had arranged travel to be there and that preparation for cost about $20,000 in fees. "My client and I have been extremely accommodating to your office in setting this meeting as you know," he wrote.

Avenatti in the email goes on to offer various ways that the meeting could still be held, offering to hold it at a different location. But more than anything, he makes the argument that it should be held as scheduled:

We believe canceling the meeting because the press has now caught wind of it is ridiculous. We do not think it was any secret that at some point you were going to meet with my client. And the fact that cameras may be present outside of your office is of no moment. Further, this fact, while annoying, has no impact on the substance of the meeting, which should be the focus.

The focus of the interview was expected to be the hush payment that Cohen gave Daniels to keep her quiet about her alleged affair with President Trump. Trump has denied any sexual relationship with her.

Either way, it's thought the payment by Cohen could be a problem for Cohen. He made the payment through a company called Essential Consultants, LLC, and said “neither the Trump Organization nor the Trump campaign was a party to the transaction with Ms. Clifford, and neither reimbursed me for the payment, either directly or indirectly." That has since been contradicted by Rudy Giuliani, who said Trump repaid Cohen.

Either version of events would potentially mean federal election laws were broken. Among the charges Cohen is under investigation for are bank fraud, wire fraud, and campaign finance violations. The FBI raided his offices in April.

At the time, Trump attacked the raid. "It’s an attack on our country in a true sense; it’s an attack on what we all stand for," Trump told a group of military leaders. Since then, Trump has distanced himself from Cohen. In June, Trump said Cohen was "not my lawyer any more."

Daniels was subpoenaed by the prosecutors as a part of their investigation and is, therefore, expected to testify in front of a grand jury. The interview, CNN reported, was thought to be in advance of this testimony.

Avenatti has used the press while representing Daniels and has been open with reporters time and again. The U.S. Attorneys working on the case appear to feel differently.