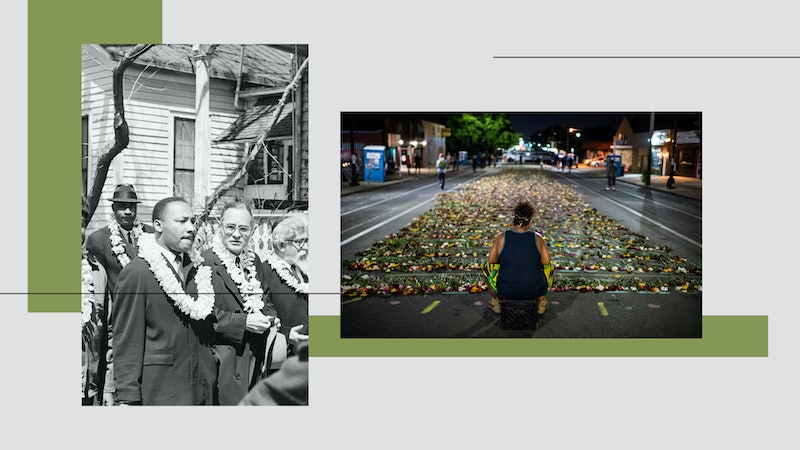 In the weeks since George Floyd's death, artwork and signage honoring Black people killed by police or in their custody — including Floyd, Breonna Taylor, and Layleen Polanco — often have something in common: flowers. The images elicit a beauty and peacefulness, purposefully contrasting the manner of their deaths. They call back to previous movements in American history, many of which used flowers as symbols of mass mourning.

In March 1965, Martin Luther King Jr. wore a Hawaiian lei as he marched from Selma to Montgomery, Alabama. The white garlands, donned by him and his fellow marchers, were gifts from a Hawaii reverend to show support for the civil rights movement. Two years later, during the Vietnam War, 17-year-old Jan Rose Kasmir faced off with the National Guard on a march to the Pentagon. In a striking image, captured by photographer Marc Riboud, she confronts them while holding a single chrysanthemum. The photo became an iconic moment for the anti-war movement. In an editorial reflecting on the image for The Guardian in 2014, Kasmir said someone at the protest had been handing out flowers. "It wasn’t until I saw the impact of this photograph that I realised it wasn’t only momentary folly [sic]," she wrote of the chrysanthemum. "I was standing for something important."

Today's creators are tapping into that history. According to Minneapolis-based artist Andres Guzman, the site of Floyd's death is currently covered with flowers, both real and artistic. "It's therapeutic and calming to look at them," says Guzman, who painted a mural of Floyd atop white, petaled flowers. The symbolism extends beyond art. In cities around the country, protesters have been holding flowers during demonstrations, from St. Cloud, Minnesota, to New York City and Houston, Texas.

In Denver, Colorado, muralists Detour and Hiero painted Floyd surrounded by roses and hibiscus on the side of a building. “The inclusion of flowers was a collaborative decision," says Detour, who's also painted a mural of Breonna Taylor surrounded by red roses. "My previous work with roses has always been to signify beauty. It's something I love adding to portraits, to highlight each individual's personality and soul.”

To Molly Crabapple, a New York City-based artist, flowers represent both mourning and beauty. "They're a good stylistic device to frame people’s faces, [and] also a traditional part of memorials," says Crabapple, a co-author and illustrator of 2018's Brothers of the Gun: A Memoir of the Syrian War, which was long-listed for the National Book Award. "[It's] the fragility of the flower, combined with the strength and dignity of the protesters, contrasted to the thuggish brutality that a line of riot cops conveys.” Her portraits of Breonna Taylor, Layleen Polanco, and others have been pasted around New York and displayed on protest signs.

On Instagram, Shirien Damra's portraits of Floyd, Taylor, and Ahmaud Arbery have gone viral. "Flowers symbolize life and growth," she says, "in defiance of systemic violence and oppression."