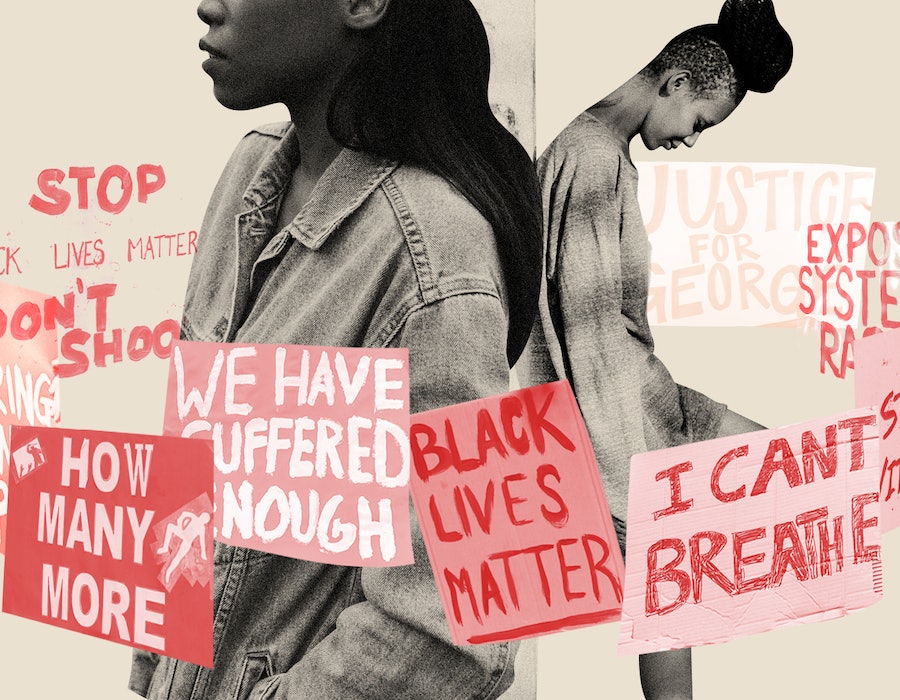 Following the killing of George Floyd, when Minneapolis police officer Derek Chauvin pressed his knee into Floyd’s neck for nearly nine minutes, demonstrations against police brutality of Black people have erupted across the country, with no signs of slowing down.

Despite the risk of police violence, protestors persist in fighting for their rights. This fight can cause an immense amount of stress, especially for Black people, who already experience heightened health risks from systemic racism — Black women are 69% more likely to die from coronary artery disease than white women, according to a 2009 study published in the Journal of the National Medical Association. When Black people are already twice as likely to die from COVID-19 than white people in America, these protests can be a major source of trauma.

Bustle spoke to Dr. Tyffani Dent, PsyD, a licensed psychologist and author who attended the Cleveland, Ohio, marches in the last week of May, about ways that protesters can protect their mental health before, during, and after a demonstration.

This interview has been edited and condensed for clarity

Anytime you're going into an anxiety-provoking situation, preparing for that as much as possible is an important part of self-care. We're not just dealing with protesting against police — we're still dealing with social distancing and COVID-19.

Catastrophic thinking is what makes us fear the worst will happen in these moments. To reduce that anxiety, ask, "What are the steps that we're going to take if the worst happens? How do we plan for that?" For me and my husband, we had a discussion with our children. I told my sorority sisters where I was going to be. We made sure our phones were charged and brought portable chargers, so we could record anything that we needed to.

One of my biggest areas of anxiety wasn't what would happen to me, but what would happen to my children if they came. My husband and I decided not to bring them, because I don't want to traumatize my children any more than society already wants to traumatize them. We talked about what kind of escalations might increase our anxiety, like if people weren’t following the organizers’ directions. We talked about whether we should leave or inform the organizers of the event if we saw that level of agitation happening.

While we were protesting, there were moments of panic and stress. A helicopter started circling. A bunch of white people on top of a bus stop were telling passersby, “People, be careful, they’re breaking stuff.”That was a lie that was going to get Black people harmed, but that wasn’t necessarily going to harm the woman saying it. The narrative she was pushing could cause increased agitation. That's when my feelings of anxiety and helplessness kicked in. We asked her to stop, and when she didn’t, we told other people not to listen to her. Because that wasn't true, and we wanted to decrease some of their anxiety as well as ours.

To manage my anxiety at the protest, I scanned around to see how others were responding. If I could see my anxiety on other people's faces, that would make me more concerned. I also made a point to tell my husband when I was feeling anxious and check in with him. We stayed close to people we knew. I needed to be aware of my surroundings and check in with the people with me to make sure that we were all grounding each other.

After protests, sometimes people come back still feeling that justifiable rage, a combination of anger and helplessness. There’s a feeling that something is left to be done, and a weariness that nothing is changing. Part of aftercare is acknowledging that you deserve to be angry. Recognize that spiritually, emotionally, physically, intellectually, you can't be at every protest because that is putting your body and your mental health through war. There may be times you have to find other ways to support protesters.

We have to step away, even if it's for a moment, because this is not a momentary fight for us. This has been our lived experience. There are moments that it's amplified, like now, but this is not going away. Stepping away doesn't mean that you're giving up.

You need joy in order to endure the trauma, the rage, and the anger. Connect with people you can have joy with. Take care of your physical self — it can be taking hot showers, yoga, or eating healthily. I also believe in cognitive and intellectual self-care, so getting away mentally from the situation by closing social media.

Sometimes we need to mentally shut down for our brains to be able to kind of really process and rejuvenate. As a psychologist, I'm also a big proponent of therapy. Other people address their mental health through spiritual outlets.

But again, these protests are not one moment in time for us. It's our existence.

More like this
11 Health & Wellness Gifts Any Fitness Devotee Will Appreciate
By Rachel Lapidos
This Company Will Send STI Tests Right To Your Door
By Lexi Inks
6 Unexpected Causes Of Post-Workout Fatigue
By Carolyn Steber
I Visited Remedy Place, The Social Club Transforming The Wellness Industry
By Rachel Lapidos
Get Even More From Bustle — Sign Up For The Newsletter