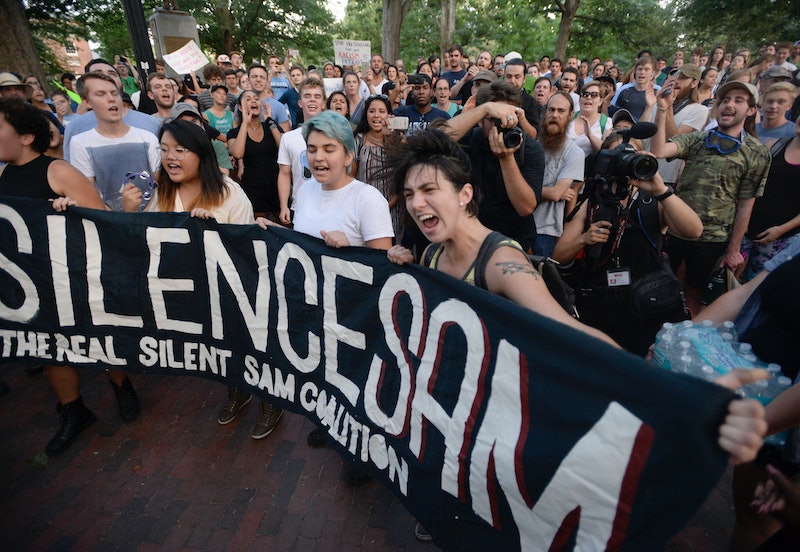 A statue at the University of North Carolina (UNC) has long been a subject of controversy, with many calling for its removal in recent years. On Monday evening, protesters toppled the "Silent Sam" Confederate statue in Chapel Hill, taking matters into their own hands after officials would not agree to immediately remove it.

As WRAL reported, the statue came down during a protest on Monday evening. Around 300 people congregated at the University's Peace and Justice Plaza at 7 p.m. and then proceeded to head to Silent Sam's base. As the outlet noted, some members of the crowd had previously erected banners around the statue and it could not be seen throughout much of the evening. At around 9:30 p.m., the statue was knocked down and was pictured on the ground. WRAL reported that some protesters kicked the statue and placed dirt on top of it after it fell.

After the statue's removal, UNC issued a statement condemning the protesters' actions. As WRAL reported, the university considered the move perilous, saying, "Tonight’s actions were dangerous, and we are very fortunate that no one was injured. We are investigating the vandalism and assessing the full extent of the damage."

Governor Cooper has been in contact with local law enforcement and UNC officials regarding tonight's rally and appreciates their efforts to keep people safe. The governor understands that many people are frustrated by the pace of change and he shares their frustration, but violent destruction of public property has no place in our communities.

According to the Charlotte Observer, the governor has supported removing Silent Sam and other Confederate symbols from public land.

Silent Sam was erected on UNC's campus in 1913. The statue was gifted to the University by the United Daughters of the Confederacy and was built as a memorial to alumni who served in the Confederate States Army during the American Civil War. According to the UNC Graduate School's website, the statue is called Silent Sam because the man it portrays "carries no ammunition and cannot fire his gun."

According to the Atlanta Journal-Constitution, many have criticized Silent Sam's presence on campus, with a variety of students, alumni, and faculty calling it a racist image. The university had faced repeated requests to remove the statue, but in July the school board ruled that a state law prohibited the school from taking down Silent Sam. The law forbids removal of statues on public land without approval from the state historic commission.

However, as the News & Observer reported, last August Governor Cooper wrote a letter granting the university permission to remove the statue, citing a loophole in the law that allows removal for public safety concerns. However, the university has said it does not concur with the governor's interpretation of the law.

On Twitter, some alumni expressed support for the move. One woman, @gwen_fulton, wrote, "#silentsam is face down. Proud of the students and community at my alma mater for taking care of what needed to be taken care of. A new history is being written."

A professor at UNC, Dr. Rebecca Kreitzer, expressed that the move was unsurprising and that the university should have addressed the issue sooner. As Kreitzer wrote on Twitter, "The only surprising thing about this is that it took so long for protesters to do this. If the university had put effort into removing it safely, it wouldn’t have come to protesters taking it down. #silentsam"

It remains to be seen if the university will further address the statue's removal or make a decision as to whether the statue will be located elsewhere.