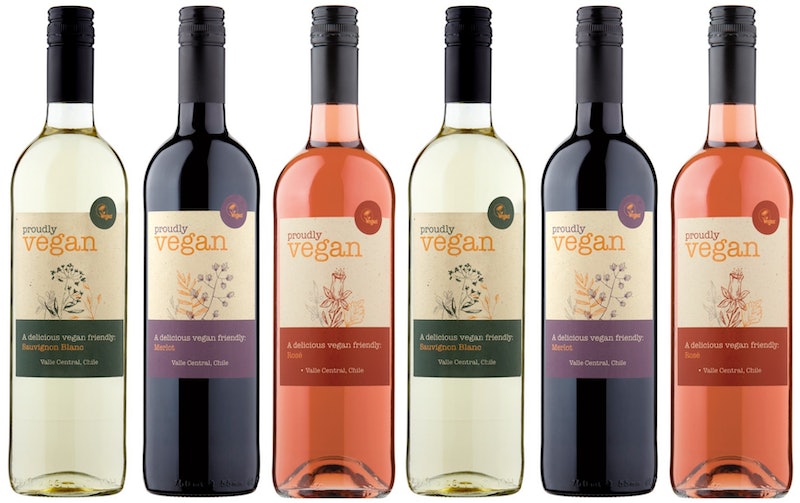 Excellent news, wine-loving, vegan friends: Award-winning UK wine label Proudly Vegan is coming to the United States — and soon. The 100% vegan collection will be arriving stateside in June 2019, reports Plant Based News. According to a press release, the decision to bring these wines to the U.S. market was “in response to data showing a 600% increase in the number of vegans in the U.S.A. in the last three years”; additionally, the press release claims, 39% of Americans are trying to eat more plant-based foods on a regular basis, even if they don’t keep to a strictly vegan diet. Since not all wine is vegan, there’s definitely a gap in the market waiting for something to fill it — and Proudly Vegan hopes to be the one to do so.

Proudly Vegan is a product of Broadland Wineries, an international wine supplier based in Norfolk, UK that operates not only in the UK, but also throughout Europe and the United States. Originally launched in the UK in 2018, Proudly Vegan quickly gained acclaim, taking home several awards for their 2016 and 2017 vintages. Initially, the collection comprised just two wines — a Sauvignon Blanc and a Merlot — although a third, a Rosé, joined the line not too long afterwards.

The Sauv Blanc features notes of gooseberry, passion fruit, and lime; the Merlot, cherry, plum, coffee, and chocolate; and the Rosé violet and floral aromas and flavors of raspberry and plum. All three are Chilean, with the Sauv Blanc and the Merlot being the award-winners: The 2017 Sauvignon Blanc won the bronze medal at both the 2018 International Wine Challenge and Sommelier Wine Awards competitions, while the 2016 Merlot won the silver at the 2018 Sommelier Wine Awards.

Up until now, Proudly Vegan wines have only been available in the UK at Ocado, Amazon UK, and a few other retailers searchable using the Proudly Vegan product locator. According to industry news source Drinks Insight, Proudly Vegan did make a brief appearance in the United States in January as part of Veganuary; Plant Based News further elaborates that a launch event occurred at that time at Gracias Madre, a plant-based Mexican restaurant in San Francisco. Now, though, the wines will be around in a more permanent fashion: Starting in June 2019, Proudly Vegan will be widely available in the United States.

Although it hasn’t been announced exactly where vegans in the U.S. will be able to get their hands on the wine, that news will no doubt come soon. Word on the street has it that a Prosecco will also be joining the line in June, so get ready to get your bubbly on. (Remember that product locator? Now would be a good time to start keeping an eye on it.) Bottles are typically £6.99 in the UK, so we can probably expect the U.S. price point to be around $9 or $10.

Somewhat surprisingly, wine isn’t always vegan — and the issue isn’t necessarily the ingredients. Rather, it’s due to a procedure commonly undertaken during the winemaking process called “fining.” As Inside Science explains, fresh-pressed grape juice can also end up with a lot of other detritus in it — seeds, stems, grape skins, and so on and so forth. Proteins, tartrates, tannins, and phenolics might also hang around in the juice. In addition to adding a visually un-appealing sediment to the finished wine, these bits and pieces can also change the flavor of the wine, giving it a bitter or astringent quality.

You can filter wine to remove sediment, but getting rid stuff like those extra tannins is trickier. That’s where fining comes in: Per The Kitchn, substances called fining agents behave sort of like “magnets,” attracting the unwanted molecules, which then “coagulate around the fining agent, creating fewer but larger particles, which can then be more easily removed.”

The issue, though, is that some of the most commonly used fining agents aren’t even vegetarian, let alone vegan. Casein, for example, is a milk protein, albumin are egg whites; gelatin is animal protein; and isinglass is fish bladder protein. But in recent years, more vegan fining agents have entered the field, including bentonite clay and activated charcoal. Although Proudly Vegan doesn’t specify which fining agent they use, they do call out the agents they don’t use — egg white, gelatin, and milk protein — and state that their mission is to make sure that “every aspect of these wines … is 100% vegan friendly.”

Proudly Vegan also takes it a step further: Everything about the packaging is vegan, too — not just the wine. That means that the whole bottle is vegan-friendly, right down to the ink used to print the label and the adhesive that keeps it attached to the glass. As Broadland’s Master of Wine and director of wine for Proudly Vegan, Dr. Arabella Woodrow, put it in a press release, “There is no reason why vegans shouldn't enjoy great wine and be 100% confident that the liquid is in line with their diet and lifestyle, without sacrificing quality or authenticity. Vegan foods and flavors are so diverse and deserve an equally varied range of wines to pair with them, at an accessible price point.”

Keep an eye on Proudly Vegan’s website for news of exactly where you’ll be able to get their wines in the United States. June can’t come soon enough!