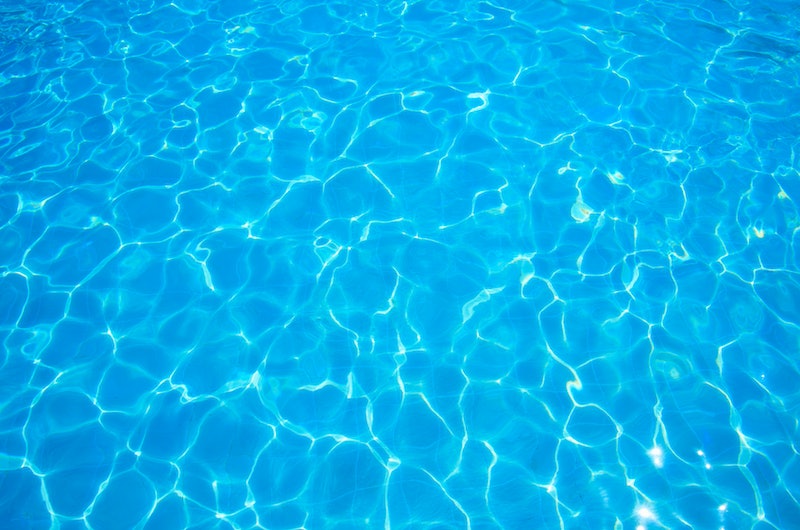 Sometimes, a healthy does of denial is necessary in order to do the things you enjoy, like swimming in a public pool. Because, pee. Just how much pee are you swimming in, though? According to a study, there may be more than 20 gallons of pee in public pools. Before you pass judgment on people peeing in the pool, though, let's take a moment to consider that we have likely all done it — even Olympic swimmer Michael Phelps has reportedly said that everyone pees in the pool.

For some reason, swimming in your own pee doesn't have the same ick factor as swimming in the urine of strangers, which is why so many people pee in the pool. However, if you head to a public pool for a respite from the summer swelter, you're probably splashing in a lot of pee that's not yours. A study from the University of Alberta, Edmonton, that was published in the journal Environmental Science & Technology Letters, found that peeing in the pool is actually a lot of people's secret shame.

"Even though no one would admit to peeing in a pool, obviously somebody has to be doing it," study co-author Lindsay Blackstock, a Ph.D. student of analytical and environmental toxicology, is quoted as saying in the Edmonton Journal. "There is no other explanation for that (substance) to be present in the pools." The good news is that while the revelation of just how much pee in present in pools isn't a pleasant one, it probably won't hurt you.

"If someone were to urinate in the pool with either blood or urine infected with bacteria near you while in the pool, there is always the chance of coming in contact with it and the small risk of acquiring an infection," Dr. Matthew Karlovsky, double board certified in urology and female pelvic medicine with the Arizona State Urological Institute, told the Edmonton Journal. This is why pools have signs posted that warn people with active diarrhea to stay out of the water.

Additionally, an abundance of urine, coupled with a pool-filtration malfunction, could actually make you sick. In the Centers for Disease Control and Prevention's Morbidity and Mortality Weekly Report, a survey of people who visited a contaminated water park found that 68 percent of those who responded fell ill with eye, nose, and respiratory problems. Urine alone didn't account for these illnesses, though: it's actually a little more complicated than that. When urine combines with chlorine, it forms byproducts called chloramines, which are usually filtered out by the pool's ventilation system. However, if that system fails, chloramines build up and can make people sick.

The CDC recommends that swimmers shower before entering a pool and take regular bathroom breaks. But, let's be honest. How many people actually do this? Public pool bathroom are gross, and most people think they are an exception to the rule. If you are one of them, clearly you're not alone. This is also why you should avoid getting pool water in your mouth.

If you think a pool full of pee is super gross, the study from the University of Alberta found that urine levels in hot tubs were three times higher than levels in the most pee-filled pool tested, according to the Guardian. (This is where that denial comes in handy.)

If you don't have your own personal pool — very few people do — there are some things you can do make swimming less disgusting. Keep your mouth closed while in the water, invest in a pair of goggles to avoid getting water in your eyes (if you're super grossed out you can get nose and earplugs too), and shower immediately after swimming. Because, let's face it, not seeking relief in a pool when it's eleventy-million degrees outside is simply not an option.