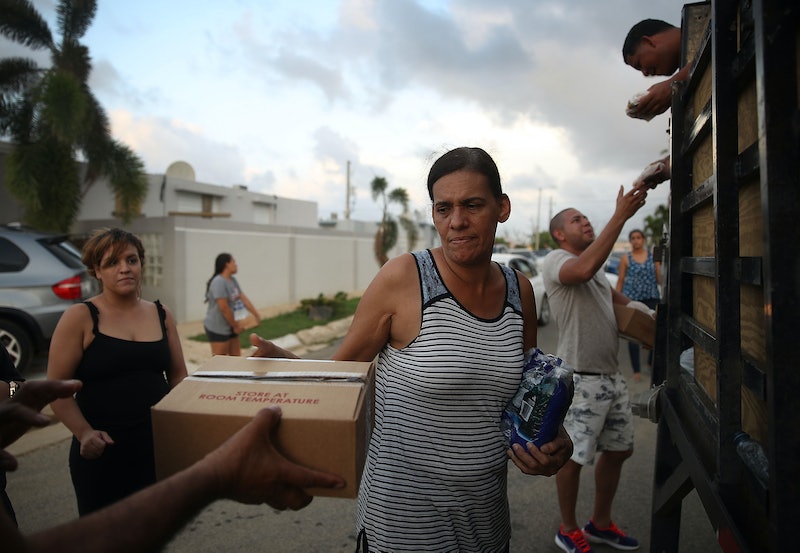 Just nine days after Hurricane Maria battered Puerto Rico and left millions of island residents without power, phone service, and clean water, thousands of containers of food, water, medicine, and other supplies to Puerto Rico remain trapped in shipping ports and warehouses, unable to reach the people that desperately need them the most.

After President Trump temporarily waived the Jones Act on Thursday, which was hindering foreign ships from delivering aid to Puerto Rico, a shortage of gasoline and truck drivers might still prevent Puerto Rico residents from receiving supplies. On Thursday morning, 9,500 containers filled with cargo were still trapped at the port of San Juan, according to Yennifer Alvarez, spokeswoman for Puerto Rico’s governor, as WGN9 reported. Officials say that the death toll in Puerto Rico may be higher than the 16 originally reported, according to a Thursday press conference.

The difficulties in getting supplies to survivors stems from the island's destroyed infrastructure and blocked roads. Puerto Rico also has a of shortage diesel fuel and truck drivers who can deliver aid around the island. Half of Puerto Rico's 1,100 gas stations are closed and people have been waiting in line for up to nine hours to buy fuel for cars or generators, according to The Guardian.

Roads remain blocked and only 20 percent of truck drivers have reported back to work since Hurricane Maria, according to a representative for Puerto Rico Gov. Ricardo Rosselló. Since cell towers are down, even contacting the drivers has been incredibly difficult.

“When we say we that we don’t have truck drivers, we mean that we have not been able to contact them,” Rosselló told MSNBC.

Due to Puerto Rico's economic crisis, people aren't able to buy emergency supplies to last them more than a week, Rafael Álvarez, vice president of Méndez & Co., a food distribution company told The Guardian. Supermarkets have been rationing supplies and banks are starting to run low on cash.

“I really hope things are worse today than they are going to be tomorrow,” Álvarez said. “People are getting very anxious with the heat and the lack of easily accessible drinkable water.”

Álvarez says that even though his company's supplies are ready to go into grocery stores, only a quarter of his distribution fleet is available due to lack of fuel and the damage to roads by the storm.

Shipping company Crowley said it had 3,000 containers of clothes, food, medicine, and water, but they are only able to dispatch 4 percent of the supplies, according to Jose Ayala, the company’s vice president.

"The problem has been with the logistics, the parts of the supply chain that move the cargo from our terminal to the shelves or to the tables of the people in Puerto Rico," Ayala told CBS. "This hurricane was catastrophic."

The distribution of diesel fuel has been an ongoing problem for the island after Hurricane Maria, according to Rosselló. Few stores are open because they need diesel power to run and the buildings that receive supplies have been destroyed or left without electricity by the hurricane. Hospitals, in particular, are in desperate need of power because they rely entirely on diesel fuel.

Rosselló confirmed to NPR that a hundred trucks with fuel are on their way to distribute gasoline throughout the island and to hopefully move supplies to survivors.