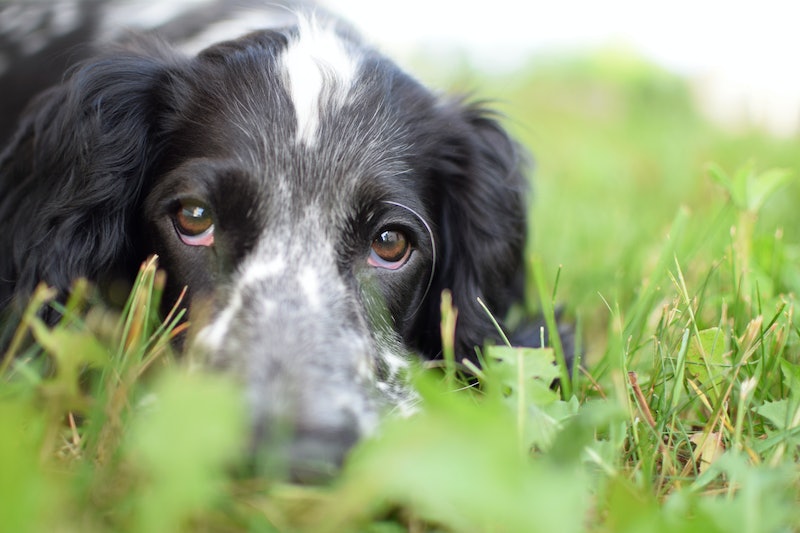 Have you ever thought your dog was looking at you in a *particularly* cute way? What about when you are trying to have a cup of tea and a biscuit on the sofa in peace and they potter over, paw your leg, and flash their big eyes at you? I know I have fallen into that trap at least a few times. However, if you've been known to give into this kind of begging, you can’t be blamed. According to recent research, puppy dog eyes are a real thing. Yes, that's right, dogs' eyes have evolved to appeal to humans specifically, making it easy for them to pull on your heart strings.

Research conducted in the UK and U.S. has found that dogs have evolved muscles around their eyes to allow them to make expressions humans can't help but fall for. According to the BBC, they produce “infant-like” expressions that humans deem super cute, resulting in a lot of attention, and helping dogs bond with their owners. While there have already been studies to prove dogs can produce these sad expressions, it's only just been discovered that there are actual anatomical changes around dogs' eyes that make it possible.

The research was conducted at the University of Portsmouth and a spokesperson from the institution told Sky News that researchers had found that dogs have "a small muscle," which allows them to "intensely raise their inner eyebrow."

Dr Juliane Kaminski, who co-authored the study, told the BBC: “When dogs make the movement, it seems to elicit a strong desire in humans to look after them.” So, when you spot your pup looking up at you woefully for a stroke or a bit of your toast, you can thank evolution.

Speaking about the science behind the findings, Dr Kaminski told Sky News:

"The evidence is compelling that dogs developed a muscle to raise the inner eyebrow after they were domesticated from wolves. We also studied dogs' and wolves' behaviour and, when exposed to a human for two minutes, dogs raised their inner eyebrows more and at higher intensities than wolves. The findings suggest that expressive eyebrows in dogs may be a result of humans' unconscious preferences that influenced selection during domestication."

As Sky News reports, the only dog species in the study that did not have the eye muscle in question was the Siberian husky, which is one of the more ancient breeds.

According to the New York Times, the study looked at other animals as well as dogs. Perhaps unsurprisingly, the research found that cats don’t move their faces at all. You won’t catch a cat begging for attention. However, horses have also developed facial expressions in a similar way to dogs.

It's amazing to think that muscles in dogs faces have adapted over time to elicit a sympathetic response from humans. I am a sucker for puppy dog eyes and can’t bare not to cuddle a dog if it is looking in anyway upset. Speaking about the study on the BBC, Professor Bridget Waller from the University of Portsmouth said the findings show "how important faces can be in capturing our attention, and how powerful facial expression can be in social interaction". Who knew our canine companions have been manipulating us all these years? TBH, even having learnt all this, I'll still fall for it every time.