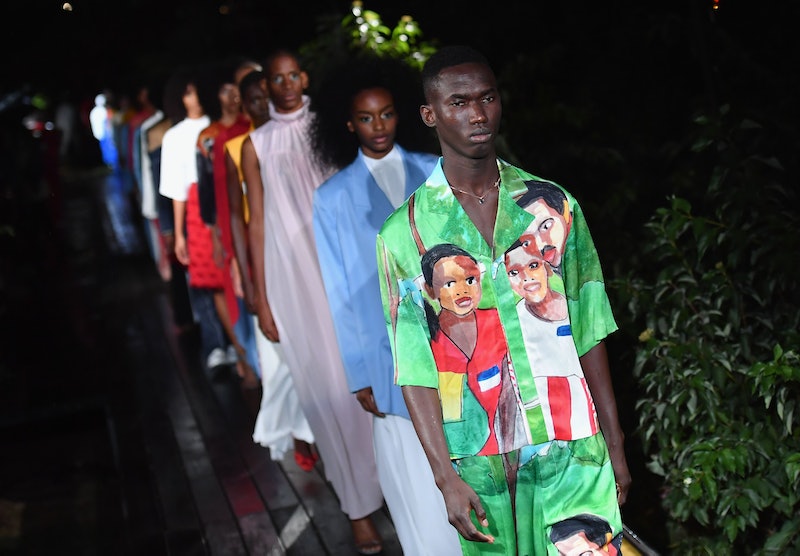 The future of Fashion Week remains up in the air. In April, the British Fashion Council announced that London Fashion Week Men’s — originally scheduled for June — would merge with the women’s shows into a single gender-neutral platform, slated to begin with a three-day digital showcase June 12. Earlier this month, Milan Fashion Week announced it will be going fully digital in July. And men’s shows in Paris, as well as the haute couture shows, have all been cancelled.

As for the shows in September, there still hasn’t been an update from event organizers. But some designers are beginning to take matters into their own hands. Saint Laurent became the first big label to take itself completely off the 2020 schedule. And on Monday, Pyer Moss announced it will skip a traditional runway show in September in favor of a more unconventional approach: a drive-in movie premiere in New York City.

The brand’s founder, Kerby Jean-Raymond, told Vogue the idea is to debut American, Also, a feature film documenting the years leading up to the epic Pyer Moss show that took place last September at Kings Theatre in Brooklyn. More than 3,000 people attended, and a 90-person gospel choir set a new standard for bold, interactive experiences at Fashion Week.

“It’s always been our mission to show the amount of thinking and laboring that goes behind putting together a collection — we’ve been slowing down the speed of how much we produce and improving the quality of what we produce throughout the years,” Jean-Raymond told the publication. “This film aims to show the love and care our entire company puts into every single moment we create and will show that we appreciate fashion as an art form and communication tool that we’ve used to embolden a community around us.”

Logistically, planning a drive-in event of any sort in the middle of New York City will prove challenging. The pandemic is sure to only complicate those efforts. But if any designer can successfully execute such an ambitious project, it’s definitely Kerby Jean-Raymond, the visionary behind Pyer Moss. It will be interesting to see if other designers follow his lead, reimagining what a safe, socially-distanced Fashion Week could look like in the aftermath of the coronavirus outbreak.