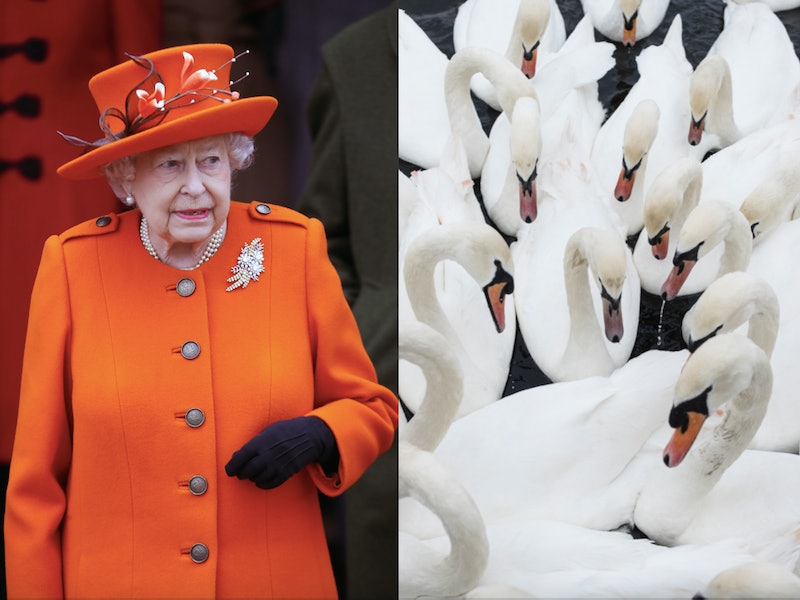 Swans are the closest thing to a sacred bird in British culture. All mute swans born in open water in England and Wales technically belong to the Crown, according to a law dating back to the 16th century; you have to have a special license from Queen Elizabeth herself to own one, and their numbers are surveyed every year. But swans in the United Kingdom now face a new threat: the flock that occupies the moat of Windsor Castle, one of the Queen's residences, has been dying at alarming rates, with as many as 30 succumbing in recent months, the BBC reported. The culprit? Avian flu.

The swans have been the focus of a media storm as vets race to save them, but one expert told the BBC that they could die in as little as 48 hours after the beginning of symptoms. It's a big symbolic blow for the country, because swans are one of its most precious symbols. Recipes for eating swan, a delicacy restricted to the most noble feast tables, date back to the 12th century, where it was usually served roasted in a "lifelike pose." Eating a swan without royal dispensation was a treasonous offense up until 1998, and for hundreds of years swans were "marked" on the beak with the nobles who had bought their ownership rights from the royal household. But the avian flu outbreak represents more than a threat to British sensitivity.

Avian flu, otherwise known as bird flu, is a specific kind of influenza that spreads among birds and has been known in recent years to threaten human health, too. The World Health Organization notes that aquatic birds are at the most risk from avian flu. In rare cases, it can spread from birds to humans; before 2013, only one kind, influenza A (or H5N1), was known to be capable of inter-species spreading, but in 2013 in China, a new variety of avian flu, H7N9, was detected that can cause deaths in humans. The United Nations reports that as of 2018, 1,624 confirmed cases have been diagnosed and 621 people have died worldwide as a result of H7N9 — but despite widespread fears of pandemic, the H7N9 problem appears to have been contained, with only a handful of cases being noted outside of China, according to the Food and Agriculture Organization of the United Nations.

The illness that is believed to have struck the Queen's birds is H5N6, one of the newer varieties of bird flu to have appeared in recent years. It first showed up in China in 2014, and in 2017, H5N6 and similar flus were reported in very small amounts in Cambodia, South Korea, the Netherlands, Japan, and Taiwan, according to the Center for Infectious Disease Research and Policy at the University of Minnesota. In 2018, it's been detected in birds in Iran and in an eagle found dead in Ireland. While the 2014 outbreak led to the death of 10 children in China, no other human fatalities have been reported, and it's not thought to be a strain that has a high risk of transferring to humans and causing health problems. The BBC noted in its reporting about Queen Elizabeth's swans that this flu "does not pose a food safety risk for UK consumers."

The Queen's birds are thus far being tightly contained, so that they don't spread the flu to other birds. The big worry for British bird-fanciers isn't that the Queen will come down with avian flu; it's that H5N6, which is highly contagious, might lead to serious problems for wildlife across the U.K. Avian flu has also caused destruction for poultry farmers in the past, as they've had to destroy whole flocks because of infections to avoid contamination. The Queen's swans aren't exactly portents of doom, but it's worth hoping that they keep their coughs to themselves.