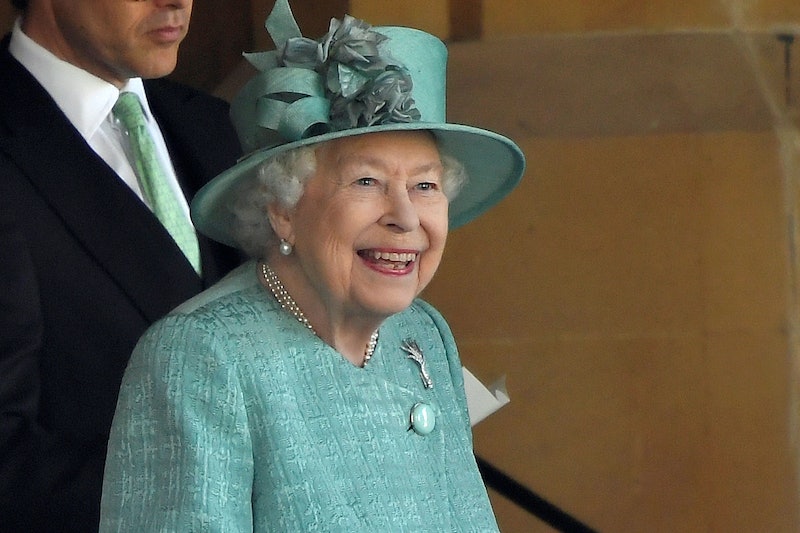 While Queen Elizabeth II is currently self-isolating at her home at Windsor Castle, that didn’t stop her from organizing a modified version of the annual event, Trooping The Colour. As crowds are now out of the question, the royal family chose, instead, to opt for a scaled-back version of the traditional gathering. In a private event, closed to the public, the Queen marked Trooping The Colour with a military demonstration at Windsor Castle.

For the occasion, she chose one of her many monochromatic looks, complete with a matching hat. This year, she opted for a pale teal mid-calf length dress by Stewart Parvin that was buttoned-up atop a green and pink silk floral dress that only peeked out of the bottom the slightest bit as she moved. The matching hat was designed by Rachel Trevor-Morgan.

Traditionally, the matriarch has worn the Brigade of the Guards brooch to the event. It is a diamond brooch that includes the emblems of the five household regiments (Coldstream Guards, Irish Guards, Grenadier Guards, Scots Guards, and Welsh Guards). This year, however, she chose to change her jewelry of choice, opting instead for a piece that was given to her by the Welsh Guards. It was, perhaps, worn as an acknowledgment of their service, as they were the regiment that performed this year’s ceremony and are currently guarding her and her family at Windsor Castle daily.

The brooch is leek-shaped and made completely of diamonds. It was designed as such due to the fact that the leek is widely accepted as the national symbol of Wales.

Queen Elizabeth II is known for using her clothing and jewelry to send secret messages or to give nods of support, so this is only one more addition to a long line of clever sartorial choices.