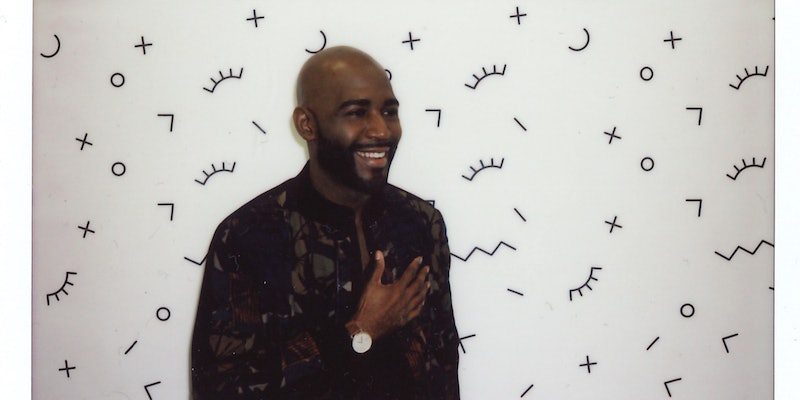 When celebrities hang out with Bustle editors, we want to give them the chance to leave their mark. Literally. So we hand them a pen, a piece of paper, a few questions, and ask them to get creative. The rest is up to them. This time, Queer Eye star Karamo Brown is leaving his mark in the Bustle Booth.

It's 10 a.m. and Karamo Brown is tearing up at my first question. I've asked him a pretty general one about how people have reacted to his role on Queer Eye now that Season 1 of the reboot has exploded in popularity. He quickly explains why he's getting so emotional. "We’re not actors," he says of himself and his four co-stars, who are all experts in different fields and collectively make up the Fab Five. "We’re playing ourselves, so when people say they like us, it’s validating." He continues, getting more choked up. "You know, we’ve all been beaten down so much in life, where people are like, ‘You’re not this, you’re not that.’ ... So when people are like, 'We actually like you,' it does not go unnoticed."

People don't just like Karamo and his fellow Queer Eye stars. They're pretty much obsessed. The Netflix show was so popular that after it dropped its first season in February, Netflix is making haste to release Season 2 just four months later. That's unbelievably quick for the streaming service — though the Fab Five had actually already shot the episodes — but it's what the fans were clamoring for. Eight new episodes hit the streaming site on June 15.

Karamo loves doing the series so much that he says he'd come back for Season 15 if Netflix wanted that. "It’s the first show I’ve been on where I am actually in love with my cast mates. Like, we’re genuinely best friends," he says. "So, yes, to work with my friends and do something that’s impactful for the world? Sign me up for the rest of my life."

He then jokes about how fans have coined the term "Netflix and cry," because the show is so deep and emotional at heart. Karamo says each transformation is genuinely filmed in a week, which means all those deep conversations happen super fast. There's no real time to beat around the bush — they just had to dive in. But Karamo was excited (and nervous) about the opportunity to explore his role as the Fab Five's culture expert with an emphasis on deeper conversations.

"I was so scared, to be very honest with you, that people were gonna be like, 'Why is the culture guy not talking about more museums?'" he says. "I was like, I just gotta be real with who I am. I am the guy that has motivational quotes all through his house. I’m just that guy."

Karamo has a background in social work psychotherapy, which lends itself perfectly to the tough topics the show explores. "It’s all about, 'How can I get people to a place where they heal themselves but also heal together?'" he says. "And people who feel that they’re different can talk and have conversations that they were scared to have before."

His authenticity is immediately apparent the moment he steps into a room, but he's also much more than just Queer Eye's go-to for deep conversations. Karamo stepped into the Bustle Booth to show off another side of himself and answer some fun, lighter questions. Keep reading to see who his first TV crush was, what he wants his legacy to be, and what he really thinks of reality TV.

Oh, and he also left a sweet note for his Queer Eye cast — because of course he did.

Get ready to Netflix and cry all over again come June 15, when eight new episodes of Queer Eye drop on the streaming site. And know that Karamo is probably getting emotional right alongside you.

More like this
Hannah Khalique-Brown Has Her Sights Set On 'Strictly'
By Frances Stewart
Here’s Everything Coming To & Leaving Netflix In July
By Grace Wehniainen
Paramount+ Wants To Take Over Your Netflix
By Sophie McEvoy
What’s New On Netflix: The Return Of 'The Umbrella Academy'
By Arya Roshanian
Get Even More From Bustle — Sign Up For The Newsletter