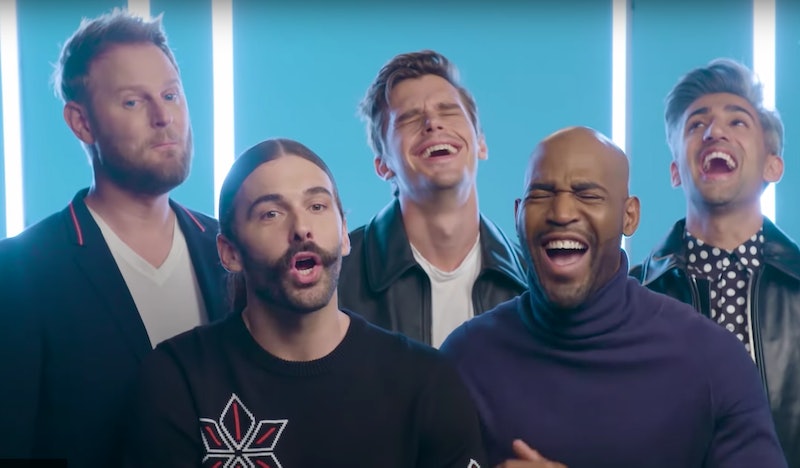 If you know anything about Mike Pence's politics, you probably know he's vehemently against gay marriage and other LGBTQ rights. So when Queer Eye's Karamo Brown went to the White House in April to meet with Karen Pence's staff, his co-star Jonathan Van Ness was less than thrilled. Or so it seems from an exchange they had in an interview with Vulture.

"It was phenomenal to be able to go in there and discuss arts, but also to speak about LGBT issues," Brown told Vulture. He had joined a group of actors that visited D.C. to advocate for increased federal funding of arts programs. Brown told The Hollywood Reporter that his conversation with Karen Pence's staff, who told him that she supports everyone having access to the arts, "gave me a glimmer of hope."

Van Ness interrupted Brown to throw a few punches at the Pences. "She's our biggest fan, she watches us every night," he mocked. "Her and Dad like to watch it every night in their modesty outfits, but they watch it completely separated because it's improper to look at each other face to face while you watch gay men."

In addition to their anti-LGBTQ beliefs, the Pences' marriage habits have come under scrutiny since the vice president entered office. Pence apparently calls his wife "Mother." He also refuses to dine alone with a woman who isn't his wife and won't go without her to events that serve alcohol (as of 2002, at least, when he said so in an interview with The Hill).

"And you forgot to mention the guidelines that she sent over beforehand," Van Ness told Brown. "No hand-shaking, no touching."

Brown laughed. "None of this is true," he said. "This is my last time getting invited to the White House."

When he was governor of Indiana in 2015, Pence signed the Religious Freedom Restoration Act, which critics said allowed businesses to discriminate against queer patrons. A few years earlier, when he was representing the state in Congress, he advocated against repealing the military's Don't Ask, Don't Tell policy, which prohibited LGBTQ people from serving openly.

He's also been accused of supporting gay conversion therapy: The agenda on his 2000 campaign website listed, "Resources should be directed toward those institutions which provide assistance to those seeking to change their sexual behavior." And during a conversation on gay rights in October, President Trump seemed to confirm that Pence's anti-LGBTQ attitude hasn't changed when he joked about the vice president, "Don't ask that guy — he wants to hang them all!"

Despite all this, Brown tried to speak measuredly about the vice president's wife during the Vulture interview. "I do not know if Karen Pence watches the Queer Eye—" he continued.

"She wasn't trying to talk about your [indistinguishable] I.Q.?" Van Ness broke in. "She doesn't like you, girl! She don't like us!"

But Brown argued for the benefits of interacting with powerful people even if they dislike your identity. "No matter if someone has personal feelings about my sexuality or how they view me," he said, "it's my job continue to show up in spaces — and all of our jobs — to continue to show up in spaces where we can say, 'You know what? I can figure out how to try to work with you so that we can make sure that we're helping future generations.'"

"I'm sorry I made fun of the Pences so much," Van Ness said, sarcastically addressing the couple. "I'm sure you guys are, like, super nice."

Brown is part of The Creative Coalition, a group of entertainment industry professionals who speak out about arts education and social issues. On April 27, they went to D.C. to advocate for the continued support of the National Endowment for the Arts.