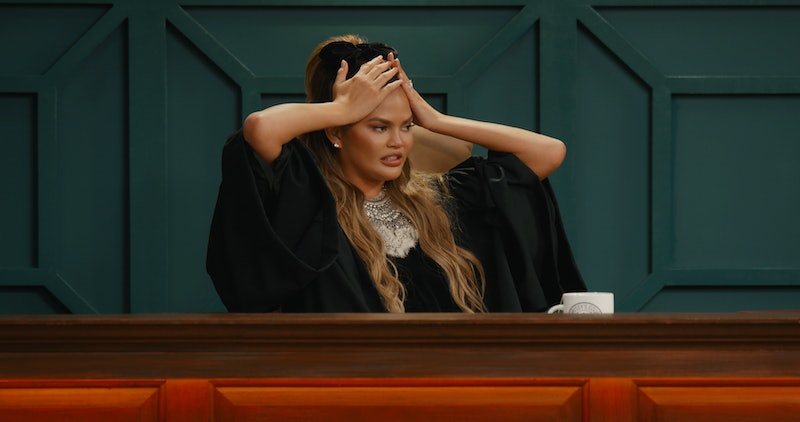 All rise for the honorable Judge Chrissy Teigen. The official trailer for Chrissy's Court is here meaning soon enough fans will get to see Teigen legally decide people's fate in court. For real. As declared in the trailer, the people and cases are real. And all of Judge Teigen's ruling will be legally binding.

Teigen will be accompanied by her mom, Vilailuck Teigen, aka Pepper, who will serve as the bailiff, attempting to maintain order in the courtroom as her daughter presides over various conflicts. Fans might also get a glimpse of Teigen's husband, John Legend, who, despite not appearing in the trailer, appears in an official Chrissy's Court GIF.

As an actual courtroom judge, Teigen will rule over one small claims case in each episode. In fact, she's already started weighing in on conflicts on Twitter. On Thursday, March 26, Judge Teigen ruled over a series of cases brought to her via Twitter, like when someone complained about their neighbors having sex in the middle of the day. (She ruled in favor of the neighbors.) She even used her powers as an official TV judge to declare a hot dog "a species of sandwich," settling an age-old debate in one tweet. And while Twitter might not be binding, in Chrissy's Court, what she says goes.

Quibi stands for "quick bites," meaning each episode can be consumed anywhere from five to 10 minutes, making it easy for people on-the-go and so they can simply watch episodes on their phones. Believe it or not, Teigen sustaining, overruling, and settling cases will be much quicker than that time she exchanged banana bread for lettuce.

Chrissy's Court premieres on Quibi on April 6. And if you enter your email at Quibi.com before the reality series' debut, you'll even get access to three bonus episodes once Teigen's show launches.

More like this
Everything To Know About 'The Real Housewives Ultimate Girls Trip' Season 4
By Jake Viswanath
Andy Cohen Apologized To Larsa Pippen After A 'RHOM' Season 5 Reunion Dust-Up
By Brad Witter
Brittany Snow Files For Divorce From Tyler Stanaland After 'Selling The OC' Drama
By Grace Wehniainen and Radhika Menon
'Bling Empire: New York’ Star Tina Leung Has A Superhero Alter-Ego
By Alyssa Lapid
Get Even More From Bustle — Sign Up For The Newsletter
From hair trends to relationship advice, our daily newsletter has everything you need to sound like a person who’s on TikTok, even if you aren’t.