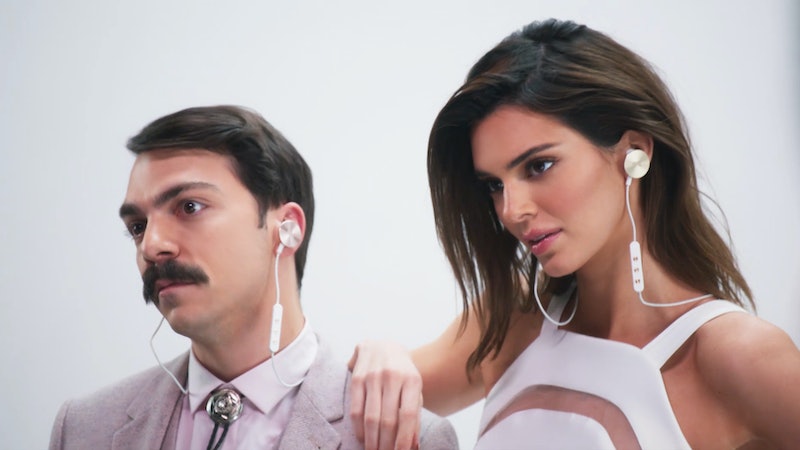 The Kardashian-Jenner family secret is out. Quibi's Kirby Jenner trailer introduces Kendall Jenner's mustachioed "fraternal twin brother" as he joins his "pretty important" sisters in finally getting his own reality show — after momager Kris Jenner pushed him in front of the cameras, of course. "You're the best kept secret of our generation," big sis Kim Kardashian tells (the fictional) Kirby in one scene from the eight-episode daily short-form comedy series, which premiered its first two episodes on Sunday, May 24.

"I'm 24 years old, and I guess it's time for me to start pulling my own weight and help out with the family business," Kirby says in the sneak preview, explaining he's an amateur model who likes to rollerblade, among other "pretty fun" hobbies. Executive Producers Kendall and Kris also appear in the show, along with Kim, Kourtney, and Khloé Kardashian, as well as Kylie Jenner.

"I'm definitely close with everyone in the family," Kirby recently explained to E! News. "But to be honest, Khloé and I have bonded a lot recently, especially during this quarantine. We've been playing a lot of Mario Kart and I think that's just been so much fun. You know, the whole family has actually been playing but Khloé and I like really take it seriously and dude, she's good. She's like pro level Mario Kart."

He added that the Keeping Up With the Kardashians stars also had plenty of advice when it came to him stepping into the spotlight: "I was a little nervous when this was all getting started. Like my mom explained, and Kendall too, they sort of told me like, 'Look, just be yourself. And these cameras are just gonna follow you around everywhere and you've got nothing to worry about.'"

Kirby started his Instagram parody account in which he photoshops himself into Kendall's social media photos in July 2015. As of publication, he'd racked up more than 1.5 million followers, and has received nominations for the Webby and Shorty Awards in social humor, best photography, and parody accounts.

Only time will tell if Kirby can keep up with his famous sisters as he takes his turn in the spotlight.