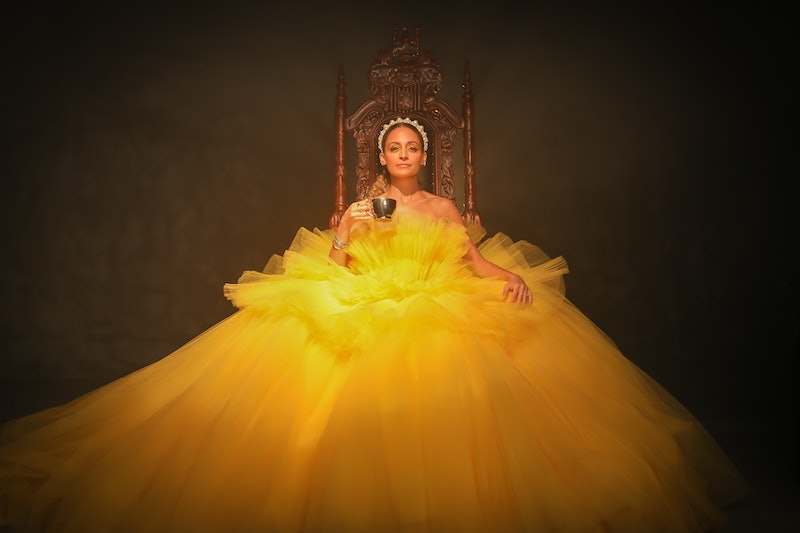 Ladies and gentleman, a new rap queen has arrived on the scene, and she's making her debut... on Quibi. Nicole Richie debuted her new rap persona in Quibi's new Nikki Fre$h trailer. And honestly, Nicki Minaj and Cardi B should be scared right now.

In the trailer for the new comedy series, starring and executive produced by Richie herself, viewers follow the TV star as she embarks on her new career path as alter ego Nikki Fre$h, a rapper with a unique blend of trap music and eco-friendly messaging, which she dubs "Parent Trap." In the clip, the fashion designer explains why she wants to launch a music career — kind of. “I am looking for music that only I can make,” she tells husband Joel Madden and his brother Benji Madden. “I want to make music about things that are important to me.”

Those things include "plants, bees, and interspecies," leading to the creation of Fre$h, who Richie describes as "a gardener, a speaker for the bees, and a trap icon." The songs previewed in the trailer focus on essentials like veggies and insects, and aims to appeal to all audiences. “Conscious trap is music for everybody — teachers, rabbis, Virgos," she explained. "But mostly, moms and gays." Nothing would appeal more to this demographic than a collab with her Simple Life co-star Paris Hilton, who has an iconic album of her own, but there's no report of that happening just yet.

According to the official Nikki Fre$h synopsis, as reported by Just Jared, the show will also see Fre$h working with "real life seekers and consciousness experts to learn ways to better serve our bodies and our planet." (Lionel Richie and Bill Nye the Science Guy are both seen in the trailer.) Add in some hilarious grocery store hijinks and Richie's comedic chops, and you have a hilariously bizarre bite-sized series for your quarantine watchlist.

Nikki Fre$h has actually been around for a little while, making random appearances on various shows, but her time to shine is now, and she may expand well beyond her Quibi show. “I’m making an iconic rap album right now about how I’m not using plastic,” Richie told The Zoe Report in February.

Nikki Fre$h will premiere in April 2020 as part of a line-up of over 50 shows that will launch on Quibi. Needless to say, the music and wellness worlds are about to get turned upside down.