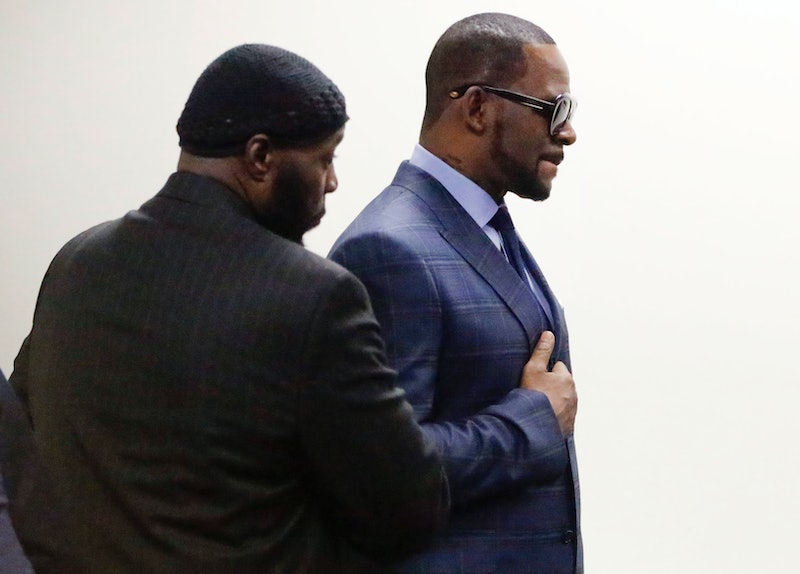 Shortly after giving what many described as a "shocking" interview with CBS, R. Kelly is going back to jail for failing to pay child support, WBEZ reports. Kelly was out on bail after being charged with ten counts of aggravated sexual abuse in an unrelated case, but CBS News reports that a judge on Wednesday ordered him back to the Cook County jail for failing to pay more than $161,000 in child support.

Kelly has been accused of widespread sexual and psychological abuse by a number of women, many of whom told their stories in the new Lifetime documentary series Surviving R. Kelly. Several mothers have said that Kelly held their daughters in his home against their will, and one woman has publicly said that she was held captive by Kelly. The R&B singer was charged in late February with 10 counts of sexual abuse; the charges involve four victims, three of whom were minors at the time of Kelly's alleged crimes, according to the Chicago Sun-Times.

Kelly has pleaded not guilty to all of the charges, and he denies all of the accusations of abuse made against him. In an interview with CBS This Morning co-host Gayle King, he said that the women who've accused him abuse are "absolutely" lying, denied ever having had sex with anyone under the age of 17 (the age of consent in Illinois, where he's been charged), and said that he never held anyone against their will.

"I didn't do this stuff," Kelly said emphatically during the interview. "This is not me! I'm fighting for my f*cking life!" Kelly then stood up and began screaming, at which point CBS paused the interview. When it resumed, Kelly apologized to King for being "emotional" but maintained his innocence.

After being charged with sex crimes in February, Kelly posted his $100,000 bail and was released. However, he's now been ordered back to prison due to an unrelated case involving child support payments to his ex-wife.

According to the Sun-Times, Kelly owes $161,663 in child support and interest. Judge Lori Rosen reportedly warned him in February that if he didn't pay the full amount, he would face jail time; Kelly's publicist told the Sun-Times that the singer arrived in court Wednesday with $50,000 or $60,000, but that Rosen wanted the full amount, and ordered him jailed until he pays it.

Kelly has faced many allegations of sexual misconduct in the past, all of which he has denied. In 1996, Kelly was sued by Tiffany Hawkins, who claimed that she began having sex with Kelly when she was 15 and he was 24. Hawkins claimed he inflicted "personal injuries and emotional distress" upon her, and the case settled for an undisclosed sum.

Five years later, former intern Tracy Sampson sued Kelly, claiming he coaxed her into "an indecent sexual relationship" when she was 17. Sampson told the New York Post that Kelly "treated [her] as his personal sex object and cast [her] aside." Kelly denied this as well, and settled the case for an undisclosed amount.

When Kelly was 27 years old, he married then-15-year-old singer Aaliyah; Kelly's lawyer says that he didn't know how old she was at the time, and the marriage was later annulled. In 2002, he was charged with 21 counts of producing child pornography over a videotape that prosecutors claimed showed him having sexual relations with an underage girl. He was found not guilty. Several other women sued him that year as well, and he has faced several other allegations and charges.

Kelly's ex-wife said in January that he was abusive in their relationship as well; he does not appear to have acknowledged or responded to this claim. His next court date is March 13, according to USA Today.