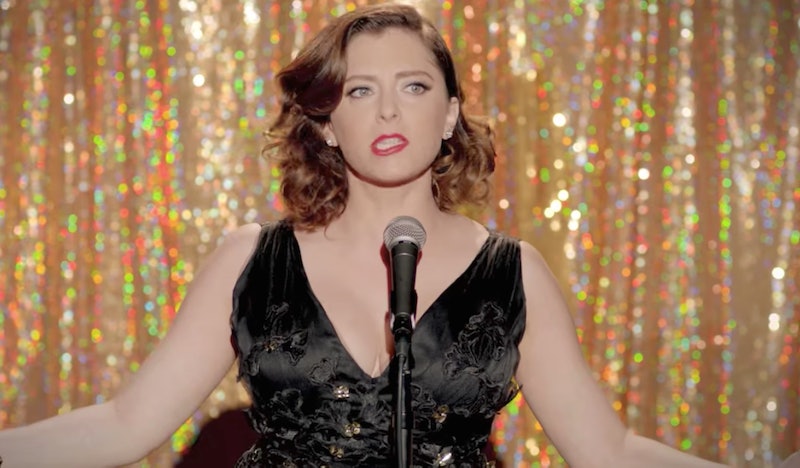 We're approaching Emmy season, and you know what that means: snarky takes on the superficiality of the award ceremony from comics. But, in a hilarious twist, Rachel Bloom's anti-award show video actually makes the best of cases for the Emmys. This isn't necessarily a surprise, given the My Crazy Ex-Girlfriend star's brand of humor. I mean, she's always been about deflating pretensions and exploring that embarrassing gap between what we tell people we're about and what we're actually about.

So it's business as usual here in the video, which opens on Bloom, who seems to be channeling the protagonist of her much-loved show, Rebecca Bunch. Just like Rebecca claims she doesn't love Josh for most of Season 1, here, the 30-year-old actor is just so over award shows. But in detailing what it is that vexes her so much about the TV format, the comic seems to spend most of the clip inadvertently summarizing the things that make award shows so awesome.

While she opens on a strong argument, that she doesn't need to "beg for acclaim," the end of the couplet makes a case for award ceremonies in general — "to... build... fame."

Whether or not you're into the machinery of Hollywood, you've got to admit that ceremonies like this are a great opportunity for lesser-known actors and shows to get their 15 minutes. I don't know about you, but, ironically enough, I stumbled across My Crazy Ex-Girlfriend in part thanks to an award ceremony, when Bloom won a 2016 Golden Globe award for Best Performance by an Actress in a Musical or Comedy Television Series.

Similarly, when the star, hair in rollers, getting her makeup done, claims "I don't need the shallow praise," it makes another great case for ceremonies. What viewers might occasionally think of as celebrities slapping each other on the back is actually a great moment in the entertainment circuit for us all to give talent its due. It's an opportunity to stop and be grateful for those shows that saw you through that time you lost your job or broke up with someone special or were just feeling blue.

The vision of art Bloom offers up in lieu of events like the Emmys sounds pretty solitary ("I'd rather sit in my den wearing black and reading ancient Grecian plays") and contrasts with the visuals we get of her at a fake Emmy ceremony — having her hair done, being asked goofy but fun questions ("Who did I enjoy kissing most?"), and standing in the spotlight, getting her acclaim.

If you'd started to forget why we need events like the Emmys, give that video a couple of re-watches. Sure, it's a little embarrassing to crave praise and acclaim and the spotlight — but this is the exact same desire that puts people in front of cameras and on stages in the first place. So, embrace your inner show-off this Emmy season. I suspect that Bloom might secretly endorse you doing so.

More like this
Theo James Revealed The Truth About His 'White Lotus' Nude Scene & Fans Can't Cope
By Stephanie Topacio Long
The 'Kenan & Kel' Reunion On 'SNL' Took A Dramatic Turn, Thanks To Keke Palmer
By Brad Witter
Keke Palmer Just Announced She's "Going To Be A Mom" On 'SNL'
By Brad Witter
You’ll Most Definitely Recognise Kyle Pryor’s Soap Star Girlfriend
By Sophie McEvoy
Get Even More From Bustle — Sign Up For The Newsletter