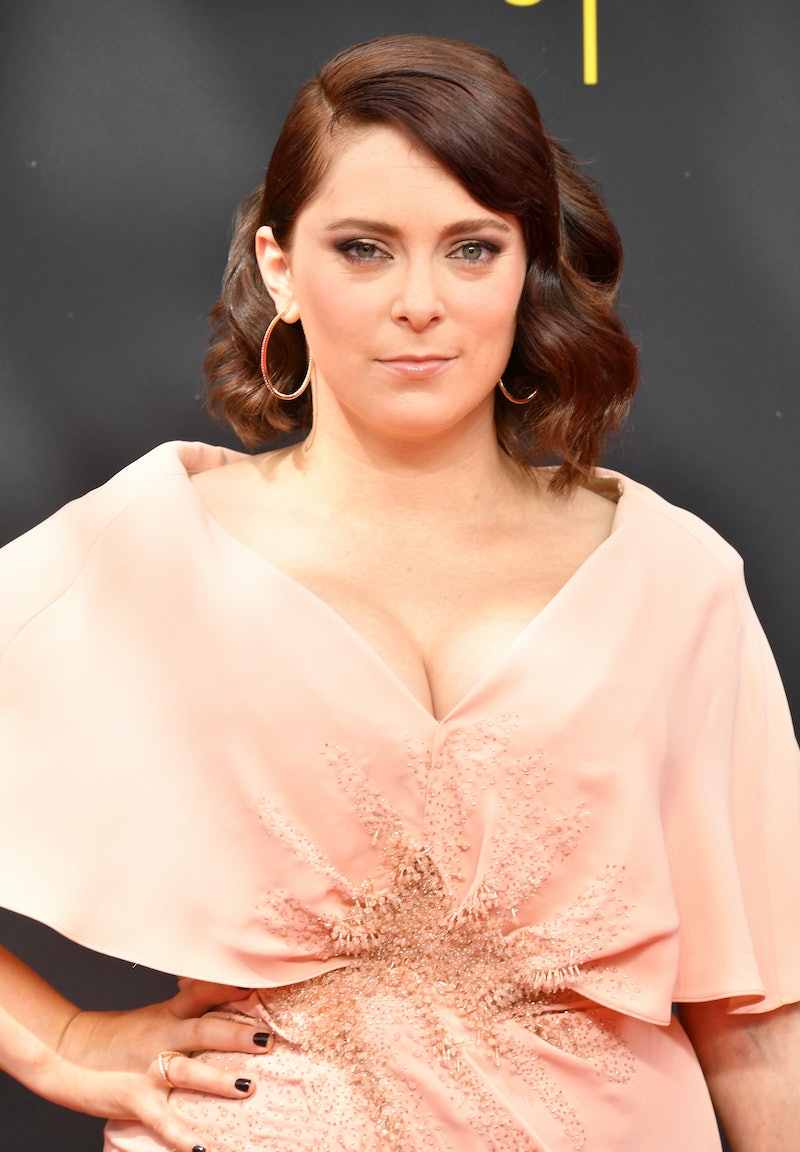 The Creative Arts Emmys were an evening full of milestones for the star of Crazy Ex-Girlfriend. On Saturday, Rachel Bloom announced her pregnancy after winning an Emmy, and the reveal made a statement about women celebrating their successes. Bloom took home an Emmy, along with co-writers Adam Schlesinger and Jack Dolgen, for the song "Antidepressants Are So Not A Big Deal," according to Variety. It was the first Emmy win for Crazy Ex-Girlfriend, which aired its fourth and final season in April.

After winning for outstanding music and lyrics, Bloom revealed her big news to the reporters backstage. "Also, I'm pregnant, so that's what's next for me," she said. "Might as well do it at an Emmy press conference, right? I was going to post an Instagram." Then, the star went on to talk about how excited she was that her career moment would be shared with her child in the future. She said: "Yeah, I'm three months pregnant. I get to tell my child that she was with me when this happened, which is really f*cking cool."

The Crazy Ex-Girlfriend creator, who also walked the red carpet barefoot, found the perfect moment to drop the big news for fans. Her baby announcement shows she's taking big next steps in both her personal and professional life, and her causal pregnancy reveal made the evening, and her series' big win, even more special.

On Instagram, Bloom celebrated the Emmy win, sharing a video with Schlesinger and Dolgen from the red carpet. She captioned the post, "WE WON AN EMMY!!!!!!! also btw I’m pregnant." The actor's friends and fans were so excited for the star, and many offered congratulatory messages about both the award-show win and baby announcement. Vincent Rodriguez, who plays Josh Chan on Crazy Ex-Girlfriend, wrote, "BESTESS OF NEWS EVER!!!!!!" with a string of emojis. Zachary Levi commented "Congrats! On both!", and Skylar Astin wrote, "Hahahahahahhhhahahahahah you would!!!!!!!"

In 2017, Bloom won a Golden Globe for Crazy Ex-Girlfriend, taking home the award Best Actress in a Musical or Comedy, but the show struggled to get attention from the Emmy Awards. For years, the award season notoriously snubbed the popular CW series, which Bloom spoofed in her sketch, "I Don't Care About Award Shows." The actor and singer was clearly enjoying her overdue win. Late on Saturday, Bloom posted a photo of the Emmy with her dog, writing, "Wiley is actively afraid of the Emmy." She also posted another Emmy photo from the red carpet on Instagram, writing, "My husband takes great pictures."

Bloom's decision to share her pregnancy announcement amid a career success is fitting for the star, who has big plans for the future. Bloom's live show "What Am I Going To Do With My Life?" will take the star on a cross-country singing and comedy tour. During a red carpet interview on Saturday, Bloom said deciding what to do post-Crazy Ex-Girlfriend was thrilling but intimidating, according to Deadline. She said, "It's a little scary, It’s kind of like I graduated from college."

Now, in addition to tackling new projects, Bloom will welcome her first child with husband Dan Gregor. By dropping the big news following the win, Bloom made a major point about women's success. While she seemed so excited about being pregnant, she made the most of her much deserved Emmy win for Crazy Ex-Girlfriend. She made sure the baby news went hand-in-hand with her accomplishment and success, and it seems likely she will continue to do so in the future.