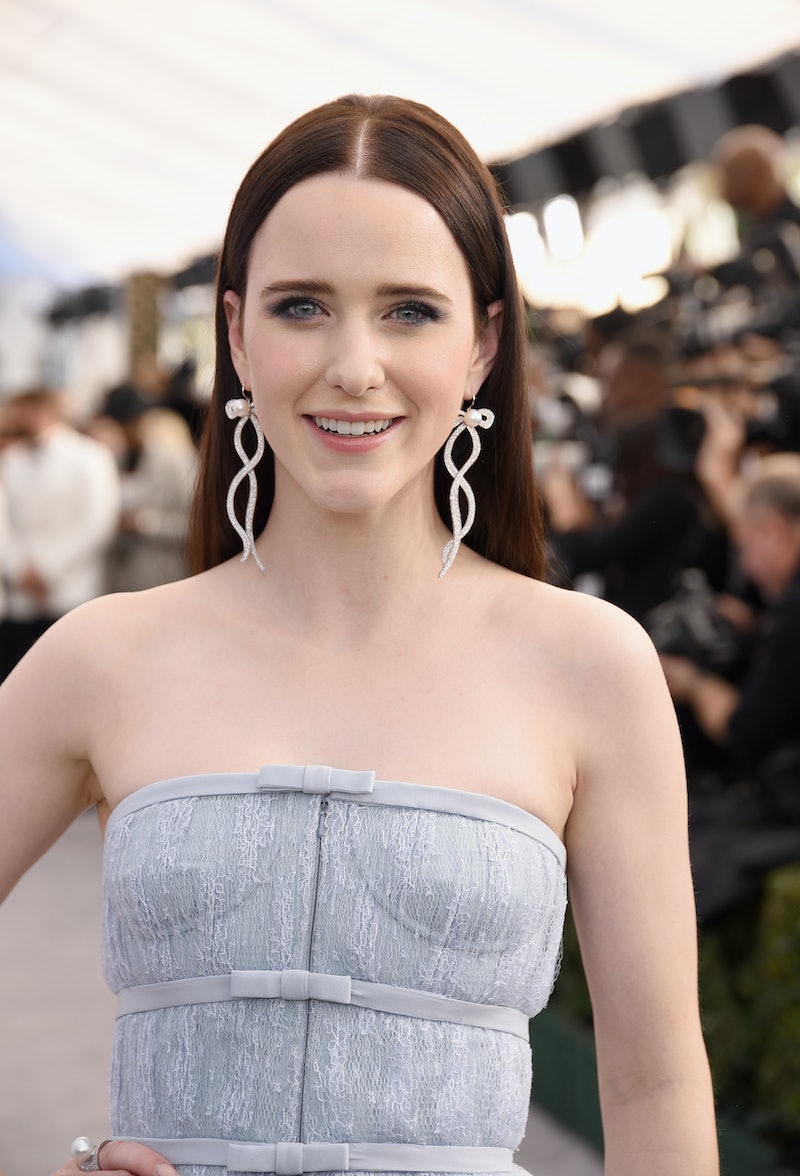 If Randall Pearson ends up hanging around the Village with Miriam Maisel next season, fans will be able to pinpoint exactly who to thank. On Sunday, Jan. 27, Rachel Brosnahan convinced Sterling K. Brown to guest star on The Marvelous Mrs. Maisel after crashing one of his red carpet interviews at the Screen Actors Guild Awards.

A few days before the SAG Awards, Brosnahan told Entertainment Tonight that Brown was her dream Maisel guest star, telling the outlet, "I love Sterling K. Brown so much!" So, naturally, when she saw the This Is Us star being interviewed by ET alongside his wife, Ryan Michelle Bathe, on the red carpet, she had to stop by and ask him to guest star on the hit Amazon series. "I would give anything to have this one on The Marvelous Mrs. Maisel," Brosnahan told ET reporter Nischelle Turner.

Thankfully, Brown seemed just as enthused about the idea as Brosnahan was, replying, "I would go crazy!" And he meant it, as Bathe joked that "You would have to give him a Xanax," in order to get him to calm down enough to complete his scenes. Still, not even a potential freakout could keep Brown from agreeing to possibly making an appearance on Season 3 of The Marvelous Mrs. Maisel: "I'm in. Deal," he said, shaking Brosnahan's hand.

In addition to brokering her dream guest star appearance, Brosnahan took a moment to gush about the This Is Us star to his face. "Sterling is incredible and can literally do no wrong. Every time I see Sterling in something else...," she said. "I would follow Sterling to the end of the earth."

And the feeling is mutual, as Brown is a big fan of Brosnahan and her show. "It goes both ways. [Marvelous Mrs. Maisel] is done at such an incredibly high level. It's so funny, it's so full of heart, it's so specific," he said. "I love the specificity of the world, and I would love to step into that. The Palladinos are so clear in what they're doing, that's the kind of people that you want to work with."

After Bathe noted that so much of Mrs. Maisel is "like theater," Brosnahan took the chance to rave about This Is Us as well. "That's how I feel about the work you're doing," she told Brown. "It's like theater that we get to be a part of, it's so so beautiful. I could go on for years." (Anyone else hoping to get invited to a This Is Us watch party with Brosnahan at some point?)

Brosnahan is far from the only actor who has recently praised Brown and his work; in December, Kristen Bell freaked out about the possibility of Brown joining Frozen 2, telling Entertainment Tonight that while she couldn't confirm the casting, "I love me some Sterling, I'll tell ya that much!" She continued to gush over the actor, adding, "I mean I would rocket to the moon! I've been such a fan of Sterling's for so long. I want him in everything."

Brown had previously shared his own delight over joining the cast of the hit Disney film, telling ET back in July that he was in "negotiations" for the project. "[I'm] feeling optimistic," Brown coyly said. "There's a new character they want to introduce that I kind of auditioned for, and it would be an opportunity do something my kid can definitely watch. This is definitely family friendly, so I'm crossing my fingers and hoping for the best."

Clearly, if Brown is already a fan of your project, the chances of getting him to appear in an upcoming TV season or movie are much, much higher. And considering the fact that everyone is a fan of Brown, we should be seeing a lot more of him on our screens.