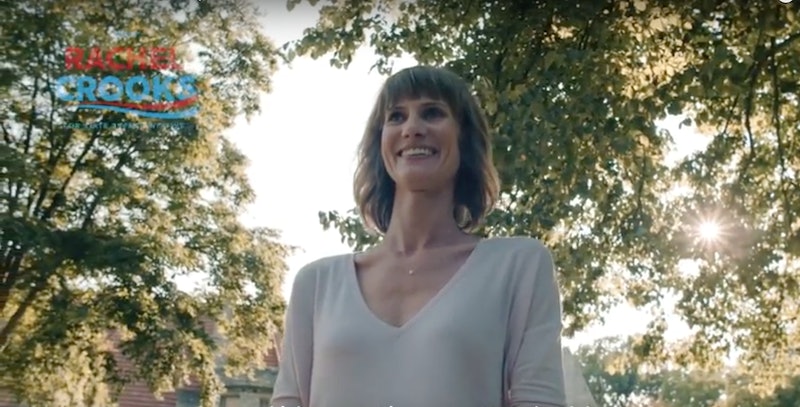 A Trump accuser who came forward in 2016 decided to run for office earlier this year, and on Monday, President Obama announced his support for the Ph.D. candidate from Ohio. In a statement to Bustle via her campaign manager, Mallory DeTota, Rachel Crooks says Obama endorsing her campaign is an "incredible honor." The 35-year-old candidate goes on to stress the fact that she and the former president share the same progressive values.

"Having my campaign endorsed by President Obama, who himself once served in the state legislature, is an incredible honor," Crooks says in an email to Bustle. "He is a man of integrity who served our country honorably for eight years, and now continues to inspire us with calls for hope and unity. I share his progressive values and his vision for a government that reflects the people it serves. As state representative, I will work hard to advocate for all Ohioans and make positive changes for the people in my district."

Obama supported Crooks on Monday, along with hundreds of other Democratic candidates. "Today, I'm proud to endorse even more Democratic candidates who aren't just running against something, but for something — to expand opportunity for all of us and to restore dignity, honor, and compassion to public service. They deserve your vote," Obama wrote on Twitter, under pages of candidates nationwide.

The Democratic candidate, who grew up in Green Springs, Ohio, is running for the Ohio House of Representatives District 88 seat. Crooks had accused Trump of forcibly kissing her on the cheeks and lips in 2005 while she was a 22-year-old receptionist at Trump Tower in New York, a story that she shared with The New York Times in 2016. Her story was released just days after the Access Hollywood tape, in which Trump can be heard making his notorious "grab them by the p*ssy" comment. Trump and his team have denied the claims by Crooks and called her allegations "fiction," according to The Washington Post.

"We remember right where we were the first time we heard that voice," Crooks says in her campaign ad, before cutting to Trump's Access Hollywood quote.

"Like every woman, I was disgusted. But for me, it was personal," Crooks says. "Mine was a story all too common for women. So I had a choice to make. I could either keep quiet or speak up. I spoke up. I said #MeToo."

In an interview with Rolling Stone, Crooks revealed that she's a first-generation college graduate and current Ph.D. candidate in education administration. Crooks has also been politically active for a while; her car bears a Bernie sticker, Rolling Stone noted, and her resume includes volunteer stints for both Obama presidential campaigns, which may make the upcoming election an uphill battle. Her northern Ohio district runs Republican and hasn’t elected a Democrat to the seat Crooks is vying for in more than 20 years. District 88 voters cast their ballots for Trump in 2016.

Crooks came forward with her accusation before the 2016 presidential election, but upon seeing that her voice didn't have a consequential effect on the result, tossed her hat into the political ring after encouragement from her friends.

“You start to feel that people are looking to you, and you have this responsibility,” Crooks said to Rolling Stone. “I decided to take that on.”

Crooks won her uncontested Democratic primary in May, and now looks ahead to her Republican challenger, incumbent Bill Reineke, in November. In Crooks' ad, she highlighted how "demoralizing" it was to see Trump elected but took it as an opportunity to get "to work."