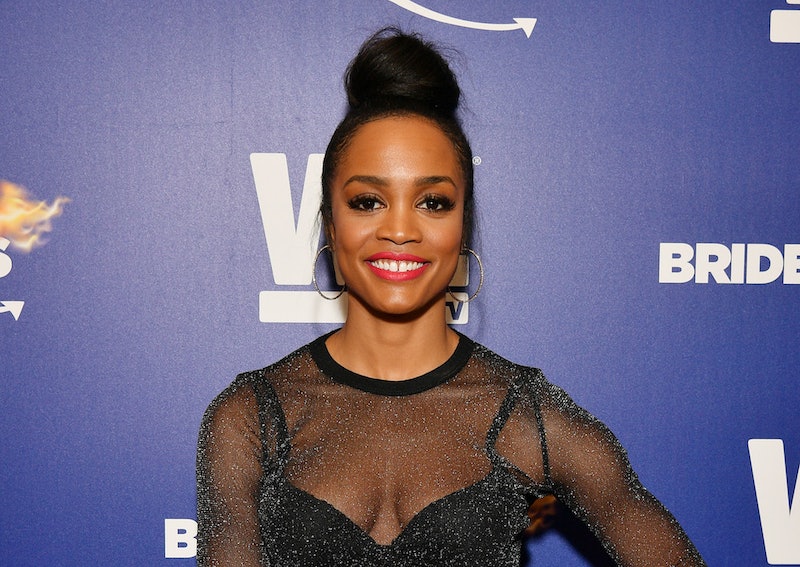 While she became the first black Bachelorette in 2017, Rachel Lindsay doesn't think the Bachelor franchise will have another black lead. In an interview with Us Weekly on Oct. 1, the attorney discussed her Season 13 stint on the Bachelorette and revealed that she was “not hopeful” in terms of the show’s diversity. “I’m not hopeful at all,” Lindsay told Us Weekly. “That’s why I keep talking about it, because maybe it’ll start the conversation and maybe it’ll change.” (Bustle reached out to ABC regarding Rachel's remarks, but has not yet received a response.)

In the interview, Lindsay attributed her doubt to the Bachelor’s recent casting of Peter Weber as the Season 24 lead, which was announced on Sept. 17. At the time, fans had wanted the lead to be appointed to fan-favorite Mike Johnson, who was a contestant in Season 15 of Hannah Brown’s Bachelorette. If Johnson had been cast, he would’ve been the Bachelor's first black lead. Lindsay told Us Weekly, “If Mike can’t get it, what’s the reason?”

Referencing Brown’s Bachelorette season, she continued, “Even after me, you’ve had Sienne [Fleming], you’ve had Tayshia [Adams]. Not that Hannah B. was bad,” she said. “But she was number nine. Tayshia was number three [of Colton Underwood’s contestants]. Usually the system picks one of the top four, why not? Before, the excuse would be, ‘No one is making it far enough.’ Now they are. So now what?”

Lindsay first joined the Bachelor franchise in January 2017, during Nick Viall’s Season 21 run. She became the Bachelorette’s first black lead in May 2017, during the series’ 13th season. It was during that season that Lindsay met her husband Bryan Abasolo, who proposed to her in the finale.

In her interview, Lindsay also said she had nothing against Weber despite her support for Johnson. In fact, she even recalled a time she ran into Weber at the Bachelor mansion prior to him meeting his suitors. She told Us Weekly, “I told him, ‘Listen, I think that you are great. This is nothing personal against you. I don’t know what you’ll hear, but I was a proponent for Mike being the Bachelor. Please don’t take this in a negative way, but I feel it is my place to advocate for him because I don’t know who else is going to. Because of the way that I look and the way he looks and I do think he’s a good candidate, I’m going to support him, but it’s not against you.’”

She continued, “He totally appreciated it, and then he goes, ‘I actually don’t have my phone right now, so I can’t see anything that’s going on in the media.’ I was like, ‘Oh, here I go! Being too honest.’”

Despite the casting, Johnson appears to be taking it all in stride. In an interview with Extra on Sept. 18, Johnson said that while he thinks he would’ve made a great Bachelor, “ABC made a great choice with Peter.” He told Extra, ”That’s who they decided to go with. I’m a phenomenal man and still am. The point of going on the Bachelorette was to find love, and that opportunity is still there for me.”

For now, there's no telling if ABC will accept Lindsay's rose — that is, a rose that calls for more on-screen diversity.