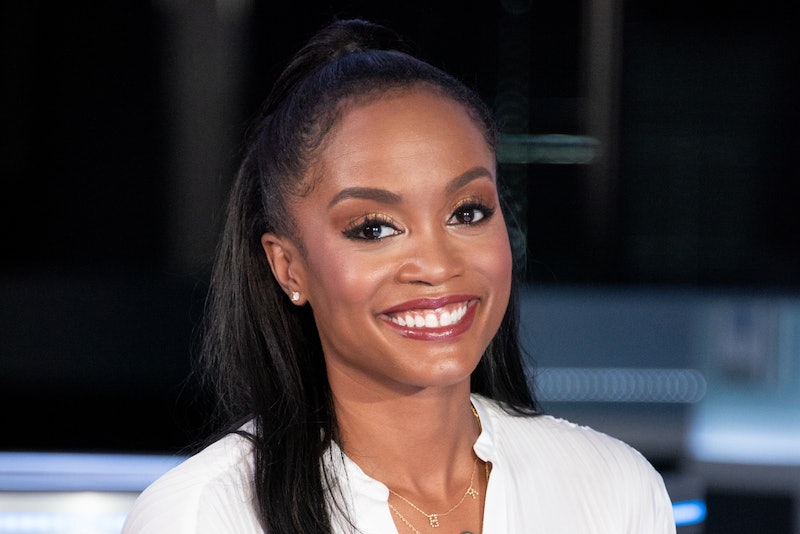 One former-Bachelorette wants Hannah Brown to do better. On Sunday, Rachel Lindsay reacted to Hannah B's apology for singing the N-word on Instagram, expressing disappointment that Hannah did not address the issue on camera or use the mistake as an opportunity to educate others. (She opted for a written apology instead.) On May 16, Hannah sang the N-word during an Instagram Live, and after being called out by fans, laughed and joked about the incident on camera.

On Sunday afternoon, Hannah issued a formal apology on her Instagram Story, writing, "I owe you all a major apology. There is no excuse and I will not justify what I said. I have read your messages and seen the hurt I have caused." She added: "I own it all. I am terribly sorry, and know that whether in public or private, this language is unacceptable." But Rachel felt that the written statement didn't do enough.

In her own lengthy Instagram video address, Rachel revealed that she'd reached out to Hannah after the initial incident to challenge her to use the platform "in a better way." Rachel, who is the first and only black lead in Bachelor history, said she initially gave Hannah the opportunity to own the incident. "Maybe it was a mistake, maybe they didn't realize the intention behind it," she said, explaining her thinking. "So, let me give them opportunity to now use their platform to correct that mistake."

Many Bachelor fans on Twitter did not find the written apology sufficient. On Instagram Live, Rachel also expressed disappointment that Hannah wouldn't address the situation on camera. "It's easy to make a statement. It's easy to hide behind words, but when you're bold enough to say the N-word on camera, on your platform, then you need be bold enough to use your face on camera and apologize in the same way you said the word," she said.

The Bachelorette alum made it clear that she didn't want to discredit Hannah's apology, but "we have to hold people accountable for what they're doing." Rachel urged viewers to educate themselves on the history and weight behind the slur, saying, "That word was used to make black people feel less than, it was used to make them feel inferior and every time you use that word and you are not black, you give that word power, and that is why it is wrong."

Rachel further added that she was "upset" about having to discuss the issue on her account, noting, "it should be the person who said it using their platform to do it." She concluded: "My whole purpose in doing this is I want to educate people on the word, but at the same time, I want to encourage you guys to hold people accountable."

After Rachel's Instagram Live, several other Bachelor-nation stars also addressed the incident on social media. Bekah Martinez also spoke out against Brown's use of the N-word on her Instagram Story, saying, "we GOT to hold people accountable to do better otherwise we're continuing to prioritize the feelings of white people (and someone we 'stan') over ending our country's loooooong history of casual racism and flippant anti-blackness." Nick Viall commented on the incident on his Instagram Story, writing, "There is no excuse. Period. Super sad and disappointing to see," and encouraged followers to watch Rachel's live.

Tyler Cameron, who appeared on Hannah's season of The Bachelorette and remains her close friend, also emphasized the need to better educate people on his Instagram Story. "This is not about dragging HB," he said. "This is about using your platform for reasons like this. So we can educate those who don't get it. This is bigger than HB This is a societal problem."

It's clear that Rachel wants fellow Bachelor-nation stars to take their responsibility as influential public figures seriously and be accountable for harmful mistakes made on their platform. A few Bachelor stars listened to her call to be better educators, and hopefully, Hannah will take the opportunity to apologize and discuss what she's learned on camera.