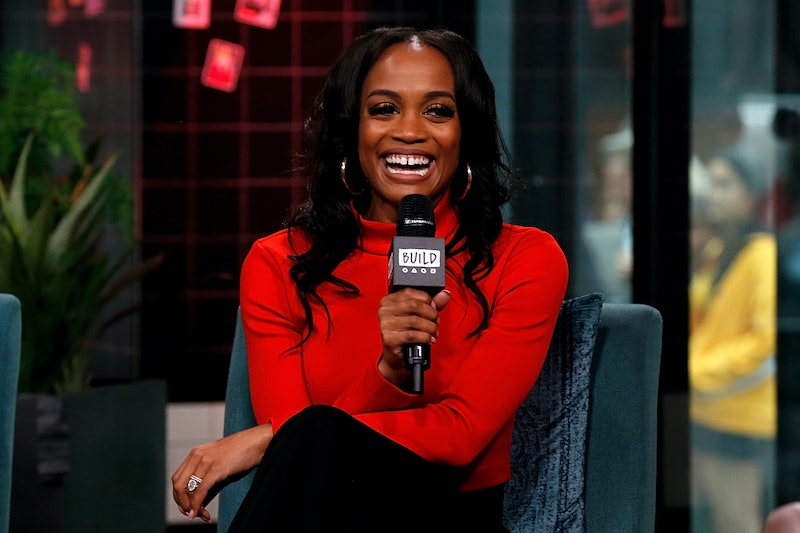 You'd think that racism wouldn't be tolerated on one of the country's most popular reality shows, but history shows that's not the case. Rachel Lindsay recalled a "racist" contestant on her Bachelorette season during an interview on Watch What Happens Live with Andy Cohen on Wednesday, June 17. The former Bachelorette is speaking out in the hope that the show will work to not cast another racist contestant again.

During the interview, Lindsay said that she experienced racism from multiple angles during her stint as The Bachelorette, especially from many viewers. "From the audience. I definitely experienced it," she said. "More so when it came to picking the men, and then at the end, my husband is Colombian, so I got a lot of racism towards the fact that we were in an interracial relationship. Just a lot of nasty messages, trolling."

Lindsay went on to say that she "did have a racist contestant on my season" but refrained from revealing his identity. Many fans will recall, however, that contestant Lee Garrett caused controversy with a string of alleged racist tweets that surfaced online, including one that read, “What’s the difference between the NAACP and the KKK? Wait for it…One has the sense of shame to cover their racist *ss faces," according to Variety.

Lindsay remarked that producers "didn't do a good job at vetting out" the unnamed contestant, which is why she's focused on changing the casting process for The Bachelor's next season. Matt James was just cast as the first Black Bachelor, and she wants to make sure that he doesn't face racism from any angle. "[It] is one of the things that I'm fighting for for Matt James as the first Black Bachelor, for them to do a better job at vetting contestants," she explained. "You need a person of color in the decision room making decisions so that doesn't happen to them."

Lindsay, the first Black lead across the Bachelor franchises, has been a strong advocate for change in diversity on both shows, including ABC finally casting a Black Bachelor. But she had mixed reactions to James' casting, particularly due to its timing in relation to George Floyd's killing and Black Lives Matter protests. "It is lovely... but let's get into the but," she said on the Bachelor Party podcast. "It's the easiest thing to me that you can do and I hate that it's in response — or it seems like a knee-jerk reaction to what happened in our society, what happened with George Floyd and the pressure that you're getting from society."

In summarizing ABC's actions, Lindsay said it's as though "a man had to die in such a gruesome and public way for us to get a black Bachelor." Let's hope that James' casting doesn't become an isolated incident.