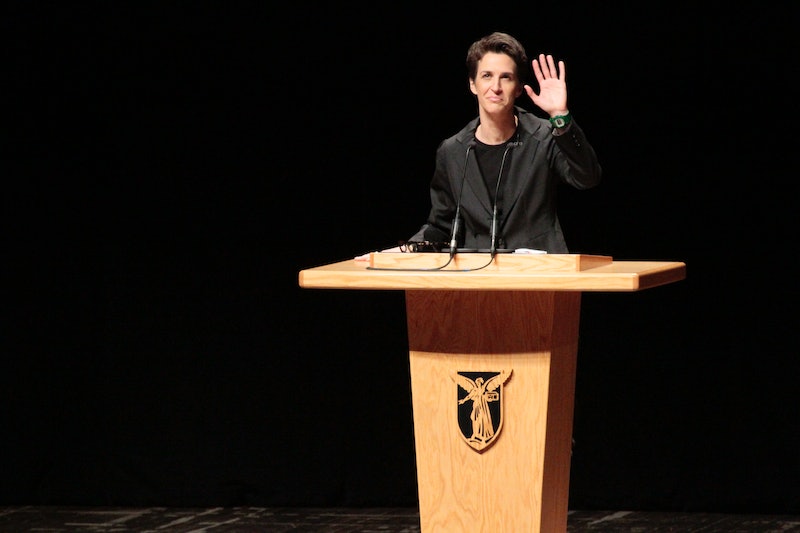 Trump may have signed an executive order stopping the border separations that his own administration ordered, but that doesn't mean that the crisis is over. Immigrant children separated from their parents are still languishing all over the country, and so news organizations are working overtime to keep the public informed on the situation. In one instance of this, a leaked video of migrant kids that Rachel Maddow played on her Monday night show will not let you forget that this problem is still very much ongoing.

According to the MSNBC's The Rachel Maddow Show, the video footage that Maddow played comes from a former employee of a government facility for immigrant children. The employee said on the show that she recorded the video, which includes footage of a girl begging to speak with her mother, and then quit her job. According to Maddow, the employee was promised anonymity in exchange for providing the videos to MSNBC, but she did explain her reasoning behind releasing them.

“I am here today because I feel like it’s important to make a difference,” the former worker at the facility told Maddow. “I feel that it’s time for everybody to stand up and to stop being afraid and actually help these children that are being separated from their parents.”

The employee, as she told Maddow, didn't know at first that these children had in fact been separated from their parents upon arriving at the border — and then the realization gradually dawned on her.

“There was a huge influx. The amount of kids that are little, that are coming alone, compared to the amount of teenagers, it’s way higher,” she told Maddow. The facility where she worked is in New York. “So that tells you a lot. How are these kids coming alone? That’s not OK. They’re not coming alone. They’re getting separated at the border.”

Watching the video, you'll see children sitting in what looks like a classroom and eating meals, all with their faces blurred out to maintain their anonymity. More heart-wrenchingly, you'll also see footage of a young girl asking to speak to her mother, clearly upset. You'll also hear one of the workers at the facility telling the children, in Spanish, that they shouldn't speak to any members of the press.

“It’s very heartbreaking to know there’s children, even if it were just one, but there’s a lot of them in my program, and it’s sad to know that these children are crying for their parents. They don’t know where their parents are,” the woman told Maddow.

The woman who shared her story with MSNBC now has a familiar face representing her legally: Michael Avenatti, who is also Stormy Daniels' lawyer. After Maddow aired the footage from the children's facility, she also interviewed Avenatti about his new client and the situation that she witnessed. In the interview, Avenatti told Maddow that the government has not kept good records of where the parents and their children have been sent after their separation — so bringing them back together will be a mammoth task.

"I applaud the bravery of my whistleblower client, who showed great courage in coming forward and providing the video and images we are showing on @maddow tonight," Avenatti wrote on Twitter. "She is a true patriot."