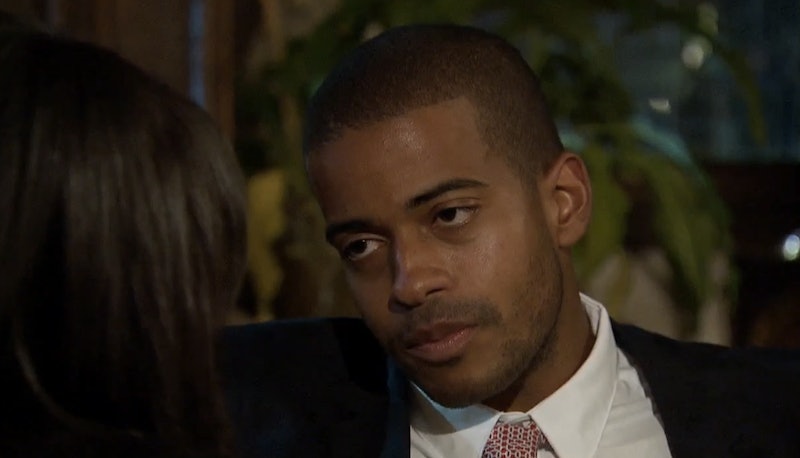 You know when you watch a movie about astronauts in outer space and you feel worried about yourself being in outer space even though the whole thing is completely avoidable by simply not going to space? That's how I feel when I watch The Bachelor or Bachelorette hometown dates. I know that I can avoid participating in a Bachelor hometown date by just never signing up for The Bachelor, but I still can't help but feel anxious if I imagine myself on the show. The families and homes on The Bachelor/ette are pretty much always presented as "normal" or "traditional," and I know that wouldn't be the case for me — and, if I'm realistic about it, I know that wouldn't be the case for many other viewers. That's why I think it's so great that during Rachel Lindsay's season, we're going to get a glimpse into at least two contestant families that don't fit the Bachelor/ette mold.

On Monday night's episode, all four remaining contestants opened up about their families. Peter and Bryan's stories were pretty much what a Bachelorette viewer expects at this point. Peter loves his family, clearly thinks very highly of them, and can't wait for Rachel to meet them; Bryan also seems to be very close with his family and the only thing that stood out from his convo with Rachel was that his mother and one of his ex's didn't see eye to eye, which led to a breakup.

But then there were Eric and Dean, who had completely different stories about their family lives, both of which stood out for not being what we're used to on this show. Eric seemed to be totally comfortable sharing about his family, who he clearly adores, and how he grew up. He told Rachel about being from Baltimore, which he called a "challenging city," and claimed members of his family, including his dad, were involved in selling drugs, and that his uncle was imprisoned because of it. He also said that he's never seen his mom and dad together. Aside from his tough upbringing, other than Rachel's family, Eric's family will be the only the second time viewers have met a black family on the show, which could give black viewers something to connect to in a way that they haven't been able to connect to other families that have been shown.

As for Dean, he was clearly less comfortable talking about his family and spent much of his one-on-one date avoiding the topic. He'd opened up Rachel about his mom passing away on a previous episode, but talking about his father proved a lot more difficult. He told Rachel that his "family is not going to be the family that you want to see" and said of his father, "He's just not a person that has any bearing on my emotional experience. He's become quite a bit more eccentric." He also said that he had fears that Rachel would judge him based on his family, which really got to the heart of the matter.

For a lot of people, even if we love our families, there might be reasons that we don't want to be judged based on them, whether it's because of their financial status, political views, emotional stability, lifestyle... the list goes on and on. In the real world, for every Peter and Bryan, I imagine there's a hundred Deans and Erics, all of whom have situations that are varying levels of complicated. For Dean in particular, I didn't expect that his dad would be who he is, but that's kind of the whole point — a person exists outside of their parents, their siblings, their aunts, uncles, and cousins, so their personalities can't be entirely gleaned by looking at other people.

This isn't to say that we haven't seen some characters, defensive siblings, and tough situations when it comes to the hometown visits before. For example, there was Clare Crawley's sister who accused Clare of manipulating their mother (Clare herself mentioned that she hoped Juan Pablo could see past her "crazy family"), and Drew Kenney was shown taking care of his severely mentally handicapped sister on his Desiree Hartsock's season in a very emotional hometown visit. Still, while many of the contestants have gone through tough times, with a few exceptions the relationships between family members on hometown dates are generally shown as at least supportive, and the homes always look like a Raymour & Flanigan ad. Judging by the preview for the hometowns on Rachel's season, we're getting some very different scenarios and that's a positive thing.

There's a comfort that comes with being able to relate to the people you watch on television. (That's part of the reason it was so great to finally see a black Bachelorette.) It looks like Dean's hometown turns into an impromptu therapy session for him, which must have been hard — especially since this guy probably just signed up for The Bachelorette for fun and suddenly found himself in the final four sharing his difficult family life — but what he and Eric are both doing is important because it shows viewers either a side of life that they can relate to in some way or a side of life that they didn't realize people live. They're either reassuring fans that their situations are OK or are promoting empathy. After years of seeing very similar families on these shows, I didn't expect to see that, but Rachel's season has already been unique in so many important ways. One thing's for sure: There's going to be a lot to live up to next time around.