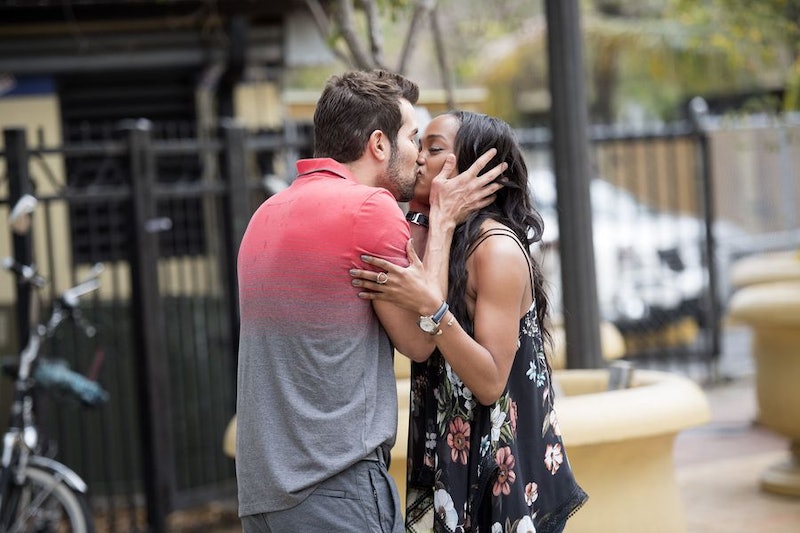 It's crunch time on The Bachelorette, and let it be known that Rachel Lindsay's family doesn't play. These gracious, lovely men and women are not going to let Rachel make a big mistake, and they've been very vocal about their opinions on Rachel's final suitors. For instance, Rachel's family doesn't buy Bryan's love on The Bachelorette — it's too much, too soon, and they think it's too good to be true.

I'm firmly in the "you-can't-be-in-love-after-nine-weeks" camp, and I'm glad that Rachel's family is, too. Rachel's family dates with Eric and Peter were fine, but when Rachel brought Bryan home, things didn't go as swimmingly. Rachel's whole family had their collective guard up, and they all essentially asked Bryan the same question — "Are you for real?" (Not exactly in those words, though.) Rachel's mother, sister, and brother-in-law especially were skeptical of the fact that Bryan could say how much he loves Rachel and the family ("It's been an hour and a half," Rachel's sister astutely noted), and when pressed, Bryan didn't really have an answer for his feelings. Actually, he had too many smooth answers, which the Lindsay clan didn't like, either, and Rachel was unhappy that her family was asking Bryan the tough stuff. Apparently, they want her to be happy, but they don't want Rachel to get fooled, either. And neither does Twitter.

Unfortunately for Rachel's family, me, and the people who are moaning and groaning on Twitter, the Lindsay's line of questioning just seemed to make Rachel like Bryan more. She definitely defended him more, and Rachel even went up against her mother at the table to slow down on Bryan. I don't know if Rachel picks Bryan on The Bachelorette, but, if she does, her family may not approve.