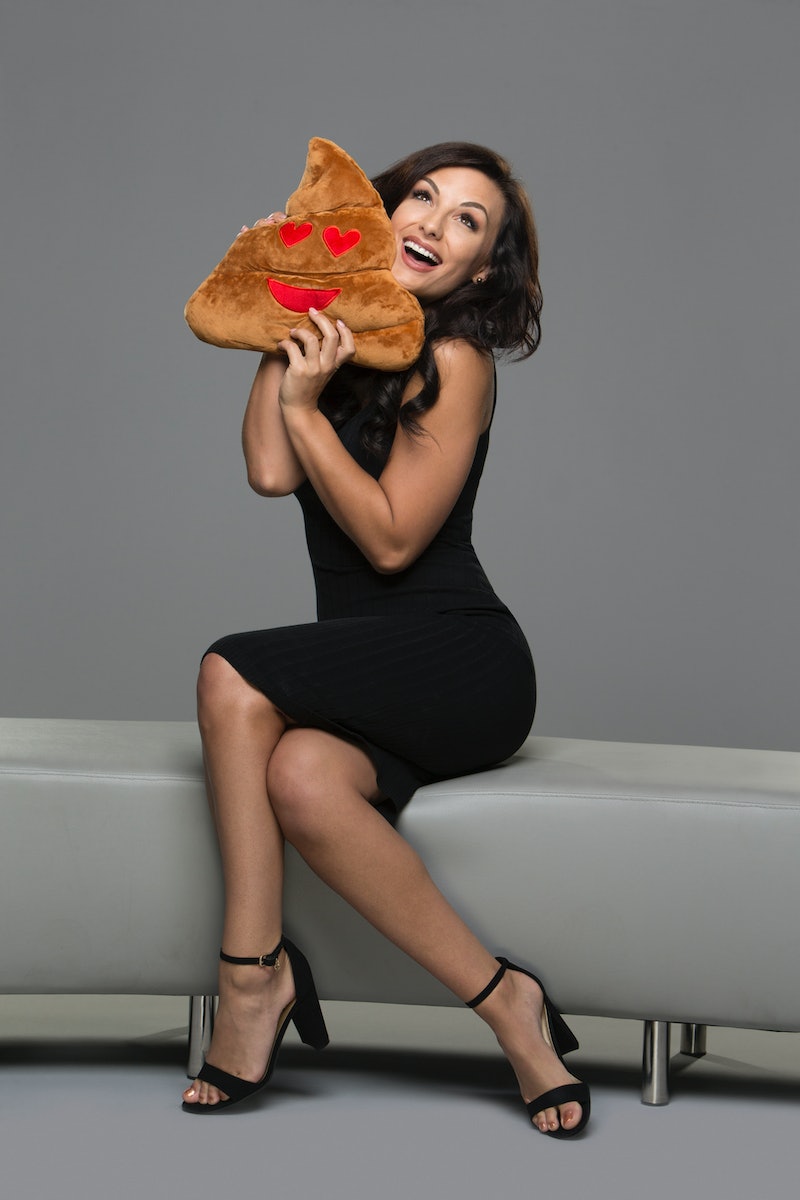 Things can get pretty heated in the Big Brother house, but the drama rose to new heights on Wednesday's episode, when Las Vegas performer Rachel Swindler received the dreaded "Crap App." As the least-trending houseguest, she chose the "Yell!" option, not knowing what form it would take. Rachel on Big Brother 20's Crap App punishment was super embarrassing, but she handled it like a champ.

So what exactly did "Yell!" involve? A man came into the BB house, looking extremely unhappy and wearing a disheveled suit. In fact, his outfit was almost certainly an homage to Chris Farley's famous motivational speaker sketch for SNL. And since Big Brother loves a play on words (think of Faysal's Hamazon punishment from last week), the man was called a "Yell Reviewer," naturally. He mostly just screamed at Rachel for mundane things she'd done badly, like making coffee. The punishment went on like that, with the man returning periodically for 24 hours to yell judgmental things at her.

It sounds humiliating — and it certainly was — but Rachel was a good sport, laughing every time he burst through the door like the Kool-Aid man. And fortunately, the "Yell Reviews" were too goofy to be truly cruel, and she mostly laughed off his criticisms. At one point, he barged in while the Vegas performer was making her bed, and he declared it the worst bed-making job he'd ever seen.

And while this was meant to be a mortifying experience, it may have actually worked in her favor. "I already liked Rachel, but that 'Yell!' punishment segment made me love her even more," BBSurvivorGirl posted on Reddit. "Getting that crap app turned out to be a positive thing for her, for sure!"

"Never before have I think BB outdone themselves with a punishment," Reddit user RGSF150 said. "It was FANTASTIC. It had me laughing. I expected a former houseguest with a big mouth, but that guy KILLED it. 100/10 on that one." However, some fans had notes: Redditor Bikinigirlout posted, "I think the yell scene would have been better if it had been Josh and the pots and pans." Indeed, some Big Brother fans thought Josh Martinez, who won BB19, would be carrying out Rachel's punishment. This would have been a callback to a particularly memorable scene from BB19, where Josh clanged two frying pans together to rattle his fellow houseguest, Mark.

Whatever the case, the way Rachel dealt with the Yell Reviewer's pseudo-verbal abuse was a pleasant change from when she initially discovered her least trending status. The Nevada resident took her trending status quite personally on Sunday's episode, and even cried on camera. What's more, in her introduction interview with Ross Matthews, she admitted that she often thinks with her heart, not her head. "I'm an incredibly emotional person," she admitted. "I have a big heart — I'm a Cancer."

And since Rachel received this embarrassing punishment for trending the least out of everyone in the BB house, she'll have to step up her social game in the coming episodes. That being said, it appears as if her punishment may have already given her a kick in the right direction. If nothing else, it's shown fans that she can take a joke and laugh at herself. What's more, Rachel also said in her Ross Matthew interview, "Hopefully, I'll be funny, and I'll be able to bring out my big, quirky personality in the house."

Rachel fans should cross their fingers that the performer can crank up the charisma soon, or she may be losing more than just stars the next time around.