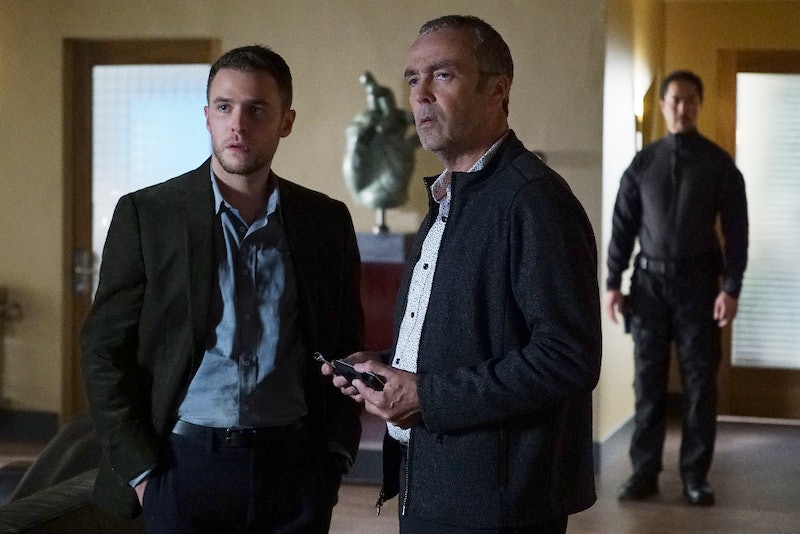 This half season of Agents of S.H.I.E.L.D. is raising a lot of questions. Who is Mack's ex-girlfriend Hope? What is the Superior? However, the most pressing issue is the robotic elephant in the room. Now that we know Radcliffe made and LMD of himself on Agents of S.H.I.E.L.D. — how many others does he have in storage? Could every member of Coulson's team have a decoy by the end of the season?

Before he went to conspire with Senator Nadeer and left his LMD to be arrested, Radcliffe does mention a second LMD to Aida. Probably he means his own copy, but it does make one suspicious. Should I be proud of how FitzSimmons are communicating in their relationship, or is one or both of them a robot? Was Mack really off visiting Hope, or was he checking in for a tune up? Has Coulson really been dead this whole time? Or, one more, could the second LMD just mean the Melinda May LMD?

The fact that Patton Oswalt, whose character on Agents of S.H.I.E.L.D. was suspected by fans to be an LMD due to his many "brothers," is appearing next week is telling. This show knows how confusing it can be, and is having a lot of fun in that particular sandbox.

All this to get ahold of a dark magic book that should belong to Doctor Strange, can you believe it? Whatever Radcliffe's planning seems to have more steps in place that we could have ever imagined, and the prospect of more LMDs on S.H.I.E.L.D. is particularly terrifying.