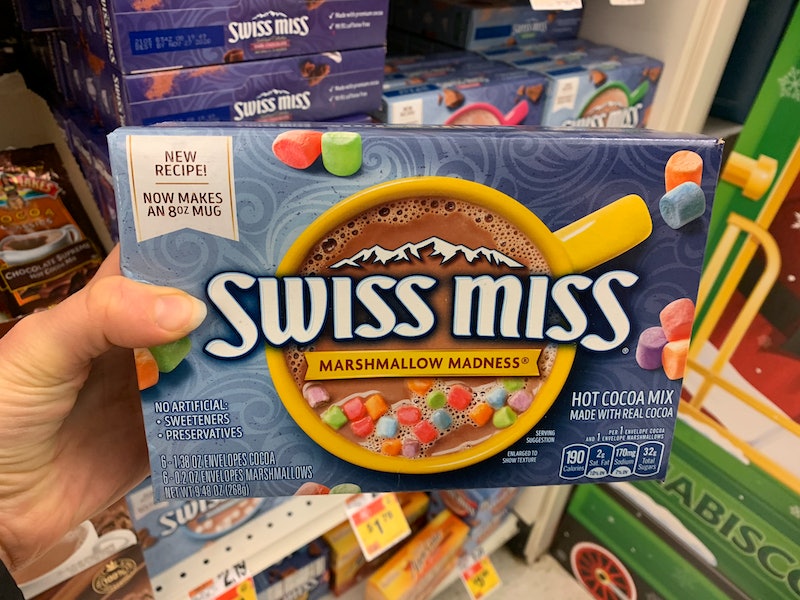 Right now you're probably coming up with your inspo board for all the things you're going to manifest in 2019, which in my case will include trying to keep all of the Avengers alive in a movie with the word Endgame literally in it, rainbows, and chocolate. While I have no recourse on that first bit, at least the universe has my back on the second: Swiss Miss has a "Marshmallow Madness" version that is essentially hot chocolate with rainbow marshmallows. Or, as I have decided to lovingly dub it, Unicorn Juice.

While this rainbow iteration isn't new, it certainly is new to my human eyes, which stumbled upon them in a Giant grocery store. Swiss Miss sells the boxes in six-count individual sizes, each of which makes its own cup of cocoa, and each of which I presume grants you more fuel for unlocking your secret magical powers than the last. Per Walmart's product listing, it's made with premium cocoa, and as an added perk for anyone with dietary restrictions, it's gluten-free. As a secondary added perk for anyone who, like me, is a nap-loving crone trapped in the body of a millennial, it is also 99.9 percent caffeine-free.

At the moment, it isn't available to buy online in single boxes (at least, not at retail value), but Walmart does have it available to purchase in an eight-box bundle. That means 48 glasses of cocoa at your disposal, a plan that I see absolutely no flaws in.

Barring that, it may be worth checking your local grocery store's hot cocoa aisle to see if you can find it there; people who were already familiar with it might note that it has gotten a slight box redesign from the version on Swiss Miss' website, but the majesty of the rainbow mallows are hard to miss.

While you're there, it's worth noting that, although they are not ~rainbow~, Swiss Miss also has a "Marshmallow Lovers" mix that seems to have the same amount of marshmallows in it — why, though, you would opt to not have rainbows surging through your veins is truly beyond my comprehension. Per Swiss Miss' website, the company also has an "Indulgent Collection," which includes two flavors: Dark Chocolate Sensation and Caramel Delight. It also has a "Simply Cocoa" Collection which, per the box, has to be made with milk to be properly enjoyed, in both Milk Chocolate and Dark Chocolate. While I haven't tried any of these, I can say that this one looks vision board-worthy for sure.

To me, this seems as if Swiss Miss has thrown down the gauntlet for whichever worthy challenger figures out a way to best combine the these premium flavors with the rainbow marshmallow mix, to make what I assume is a beverage that makes humans more powerful than any to precede it. If anybody needs me, I will be looking for a unicorn-themed mug worthy of said challenge before attempting it, because I am nothing if not committed to my brand.