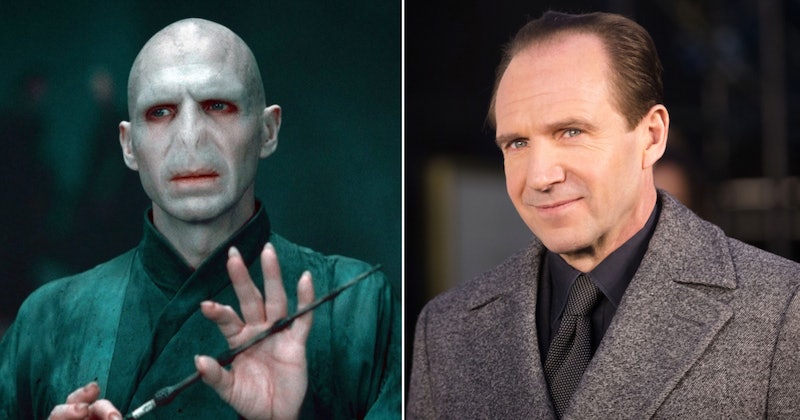 Despite Harry Potter reaching an emotional end years ago, fans of the iconic franchise are still very much dedicated to the fictional universe — which often involves dissecting every last detail and character included within the epic stories. Author J. K. Rowling has been known to reveal previously withheld details about some of our best-loved characters, but fans were left truly shook when Harry Potter's Ralph Fiennes revealed hidden secrets about Voldemort's wand. But what exactly did the actor let slip?

Well, eagle-eyed fans might have noticed that Voldemort's wand defies the usual laws of gravity, and never seems to fall out of the villain's hand. During a video interview with GQ, Fiennes has revealed the secret behind the on-screen illusion, and no, it's not wingardium leviosa. Sadly. Speaking to camera, Fiennes revealed:

"With Stuart Craig, who's the production designer, and his team, we discussed what the wand would be. It has a hook on it, so I can hold my hand, and then the end can hook around this finger. Like I almost have the hand open... you'd think it would fall off the hand. But I just enjoyed that it could be light in the hand."

The Grand Budapest Hotel star also discussed one of his favourite Potter scenes, which was actually the very last scene in which he portrayed the menacing Lord Voldemort. Speaking to GQ, he said: "I loved shooting the death duel, that was cool, with Daniel [Radcliffe] in the courtyard. That was epic." And when quizzed about how he got himself into that moment, and visualised the blasts coming from his wand, the actor replied: "You just have to hate Harry Potter with a deep loathing." He then added: "I'd be pissed if they brought back Voldemort and didn't ask me!"

During an appearance on ITV's The Jonathan Ross Show, Fiennes shocked Potter fans when he revealed that he initially turned down the infamous role as he was "ignorant" about the J.K. Rowling book series. As Bustle has previously report, he said:

"The truth is I was actually ignorant about the films and the books. I was approached by the production. Mike Newell was directing the film that they wanted me to be in… the first time Voldemort was going to appear physically. Out of ignorance I just sort of thought, this isn’t for me. Quite stupidly I resisted, I was hesitant."

Thankfully, the actor's sister convinced him to reconsider and take on the role. Fiennes went on to say: ""I think the clincher was that my sister Martha — who has three children who were then probably about 12, 10 and 8 — she said, 'What do you mean? You’ve got to do it!' So then I rewound my thinking."

Although Fiennes did eventually sign up to star in the Harry Potter movie franchise, many actors didn't do the same. According to Digital Spy, major names including Kate Winslet, Hugh Grant, Naomi Watts, and Robin Williams all turned down the chance to star in the film series. Wow, it's amazing to imagine how different the Potter universe could have been with those guys in it...