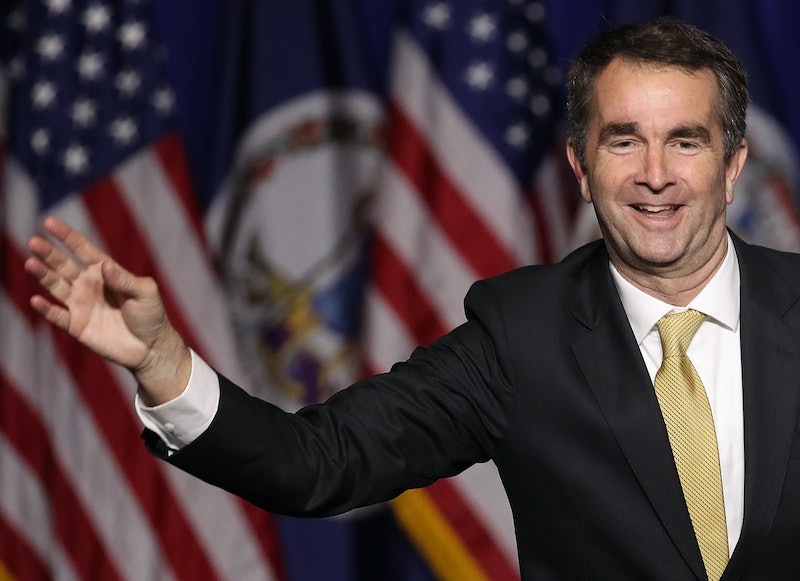 As calls to resign continued to mount, Virginia Gov. Ralph Northam apologized for appearing in a yearbook photo featuring blackface and a Ku Klux Klan robe Friday, but refused to step down. In a video message released Friday, Northam acknowledged "the racist and offensive attitudes" represented in the photograph, which appears to show a man wearing blackface standing next to a man in a Ku Klux Klan robe at a social gathering.

"I accept responsibility for my past actions and I am ready to do the hard work of regaining your trust," Northam said in a videotaped statement released on Twitter on Friday. "I have spent the past year as your governor fighting for a Virginia that works better for all people. I am committed to continuing that fight through the remainder of my term."

According to The Washington Post, the photo appears on a page dedicated to Northam in the 1984 Eastern Virginia Medical School yearbook. Although Northam has previously admitted to appearing in the photo, it remains unclear if he is the man wearing blackface or if he is the one wearing the Ku Klux Klan robe.

While Northam apologized to Virginians in his recorded message, he acknowledged that he could not change decisions that had already been made. "That photo and the racist and offensive attitudes it represents does not reflect that person I am today or the way that I have conducted myself as a soldier, a doctor, and a public servant," he said. "I'm deeply sorry. I cannot change the decisions I made, nor can I undo the harm my behavior caused then and today."

But a number of Northam's fellow Democrats have called for the governor to resign, including a number of state legislators, the NAACP, Virginia's legislative Black Caucus, and the state's former governor, Terry McAuliffe. Democratic presidential candidates like Sens. Cory Booker, Kirsten Gillibrand, Kamala D. Harris, and Elizabeth Warren have also called for the governor to step down in light of the photograph.

In a statement calling on Northam to resign, Virginia House Democrats said Friday that they were "no longer confident" in his ability to represent Virginians, NPR has reported. The state's Republican Party has also called for Northam's resignation, calling his appearance in the photograph "unforgivable."

A number of Virginia constituents have also pushed for the governor to resign. "Ashamed that I voted for you," one Twitter user wrote in a tweet to Northam on Saturday. "Tired of feeling overwhelmingly disappointed by our country's 'leadership.'" Another user wrote that donning blackface and/or Ku Klux Klan robes is "not acceptable, ever — as a costume, as a prank, as a beer party attendee" and "goes beyond a youthful mistake in judgment."