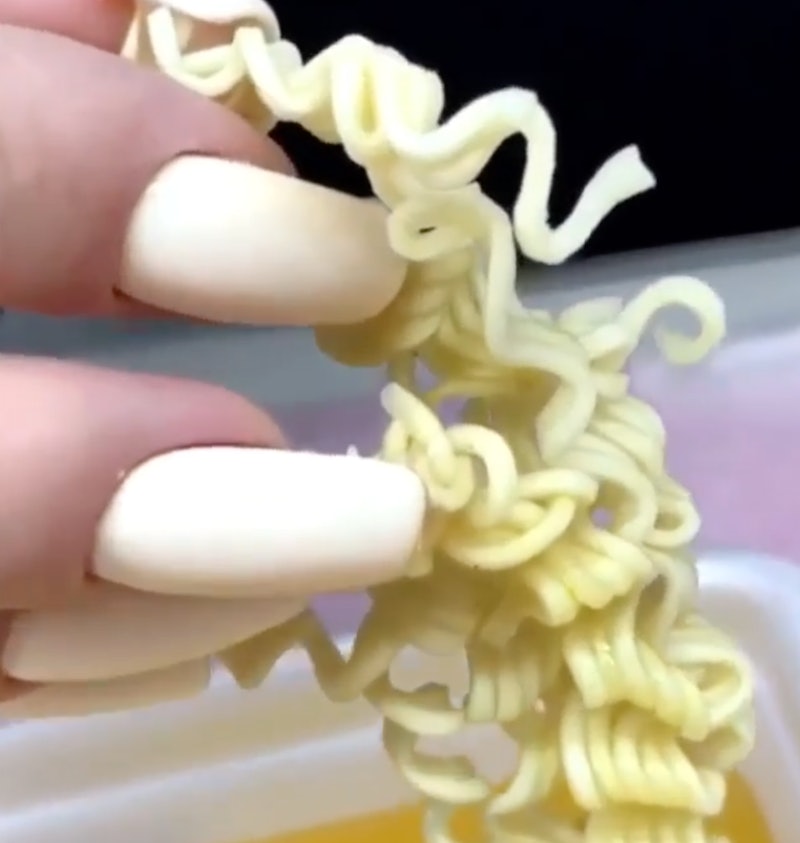 Uncooked pasta is often used for arts & crafts and homemade jewelry pieces. However, this ramen noodle manicure actually happened, courtesy of Nail Sunny, which touts its status as the #1 nail art chain in Russia. Nail Sunny is known for the unusual, slightly creepy, and functional manicures that populate its 2.1 million-strong Instagram feed. This could veritably be the nail salon's most extra design to date.

The chain has created a Starbucks coffee cup manicure from which you can actually drink. It fashioned a cheese grater into nail art that actually, you know, grated cheese. It also crafted a MAC makeup brush mani that actually applied product. Nail Sunny usually posts the videos and asks fans "Yes or no?" regarding their opinions on these odd (and sometimes oddly satisfying) manicures.

The ramen noodle mani is constructed from an actual package of the dehydrated soup. At the end of the mani, the nail tech actually cooks the soup with hot water and the recipient of this nail art actually noshes on the noodles.

While one might wonder about how hygienic it is to actually eat such noodles, and while it's not exactly practical to have either cooked or uncooked noodles hanging from your nails, it's still fun to watch the nail artist create this manicure in various stages.

The tech started with a matte, cream-colored based for the ramen mani.

The next critical "tool" is the actual noodles themselves...

... which had to be trimmed accordingly.

The noodle strips were then fitted and affixed to the underside of the nail.

The noodles sort of look like long, blonde tendrils from this vantage point. Just sayin'.

Then, they added the seasoning.

It's fast food and part of a nail tool "kit."

The nails and noodles were dipped in the soup and there you have it. Good enough to eat, right? Well, while we don't recommend trying this at home, there's nothing wrong with marveling at it on the internet.

The recipient of the ramen noodles appears to have found her manicure quite yummy.

Here's the execution of the ramen nails in full. Of course the internet had lots of questions and opinions about this nail art.

You know, they are kinda long.

A lot of people were not feeling these nails.

Some users felt that this manicure was just too far out there.

This comment posed a very valid question. These are the types of thing to consider in such cases, since many beauty products are not meant to be ingested despite being safe for external use. This is also why these types of manis are best left in the, well, hands of a professional.

But not everyone was anti. The were some users who were feeling the creativity that defined this nail art.

Nail Sunny has attracted international attention over the past year. The company is opening a location in Los Angeles in the near future so stateside fans can get in on the mani fun.