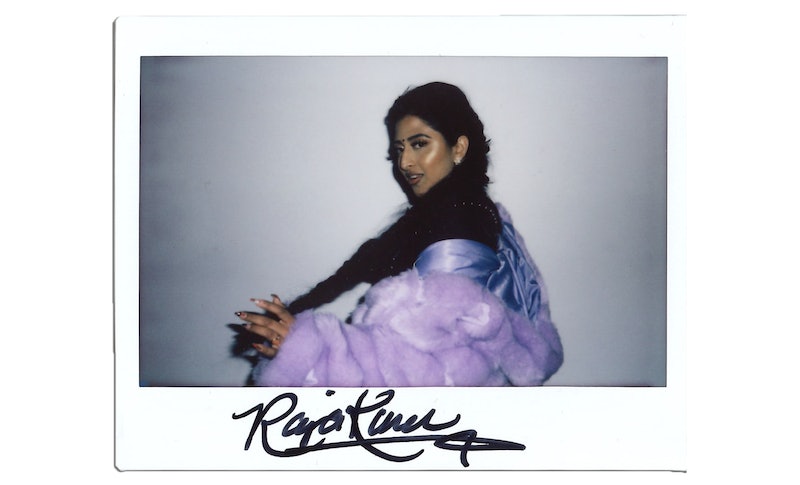 When celebrities hang out in the Bustle office, we want to give them the chance to leave their mark. Literally. So we hand them a pen, a piece of paper, a few questions, and ask them to get creative. The rest is up to them. This time, rapper-songwriter Raja Kumari is leaving her mark in the Bustle Booth.

Raja Kumari will be the first to tell you that she's waited a long time for this moment. She's been performing — dancing and rapping and singing and songwriting — for over 20 years, since she was a kid in California, and she already has an EP, a mixtape, and dozens of songs under her belt. She's seen some major success, from a Gwen Stefani collaboration to a BMI Pop Award. But this, the release of her long-awaited second EP Bloodline? This is way different. Because with these songs, Kumari is finally becoming the pop star she wished she had back when she was growing up.

"People keep asking me, 'What’s this year for you?' And I’m like, 'It’s the year of ascension.' It’s full ascension for me," says Kumari, 33, sitting down in Bustle's New York office on the day of Bloodline's release. "It’s finally stepping into the role, 100 percent, of what I needed as a child."

As a kid, the singer says, she was obsessed with pop music ("Max Martin basically raised me," she says with a laugh) and dreamed of one day becoming an artist on the level of one of her idols, like Britney Spears or *NSYNC. But, as she quickly realized, the Hollywood music industry wasn't exactly filled with Indian-Americans like herself. Yet instead of bringing her down, that frustrating lack of representation compelled her to keep working, and incorporate her identity into her music.

"It was really for a desire to see an Indian person in that space," she explains. "I truly love my culture so much that there was this point where it was a decision: Do I let go of my Eastern identity to make it in the West? And I just couldn’t imagine a world without my culture in it. So I was just like, 'F*ck this, I’m actually just going to make sure there’s an Indian there so that younger girls don’t ever feel the way I feel now.'"

When making the five-track Bloodline, available to stream and buy now, Kumari bridged Indian and American music styles as much as possible. These songs, she says with a big laugh, are "battle anthems for a bad bitch," full of the "strength" she got from going back to India a few years ago and exploring her heritage. "I brought all of that energy into this album, just to be unapologetic and [give] a big middle finger to anybody who says India-ness is not welcome in the West," explains Kumari.

The musician's confidence is echoed on each of the EP's "ferocious" songs, as she describes them, and fans are taking note. To be "getting reactions from people in America and having people sing along to things… with Hindi in it, it’s very rewarding," says Kumari. "There’s an energy you feel from your culture being shared. It’s really incredible."

And if anyone isn't on board? Kumari couldn't care less. “There’s always assholes — I’m over them," she says. "They’re just fans in disguise."

Now that's the attitude we all should have in 2019. For more on Kumari, check out her Bustle Booth below:

More like this
On 'The Handmaid’s Tale,' Christine Ko Fights Back
By Gretchen Smail
The Spice Girls Just Dropped A Brand New Music Video
By Sam Ramsden
Kate Bush Revealed The Real Meaning Behind 'Running Up That Hill' Lyrics
By Darshita Goyal
'Grey's Anatomy's New Intern Got Advice From Dr. Bailey Herself
By Grace Wehniainen
Get Even More From Bustle — Sign Up For The Newsletter