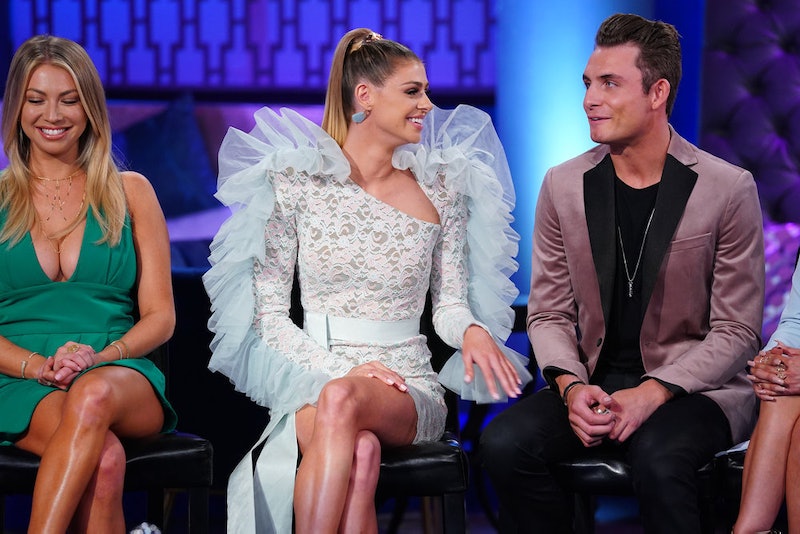 Vanderpump Rules Season 8 — premiering Tuesday, Jan. 7 — looks like it will bring some hurdles for James and Raquel. With Raquel now working at SUR (and James still not), their relationship is feeling the tension. "If you can't get your sh*t together, we will break up," Raquel tells her boyfriend in the trailer. But despite this potential drama — not to mention their torrid past — it seems like James and Raquel are very much still together.

As recently as Monday night, Raquel posted a photo of her and James to her Instagram story. And he shared the love just a few days earlier: "2020 here we are! @raquelleviss I LOVE YOU," he wrote, in part, on a New Year's Day Instagram post. This is notable, since the couple met at a 2016 NYE party he was DJing, per Bravo.

Since then, however, Raquel and her boyfriend have had their share of problems. Rumors of James' infidelity have been circulating since early 2017, but he has denied them, and Raquel has stuck by him. In late 2018, the pair even moved in together.

Still, some castmembers are skeptical of their relationship. "I don't know that I feel badly for [Raquel] anymore because … it's like seeing the murder scene and still needing more evidence," Lala Kent told Us Weekly in December 2018. "It's like, 'OK, girl, I can't even deal.' Like, you're killing my brain cells at this point, and I don't have a lot of those to lose."

Things came to a head during the Season 7 reunion, during which James was confronted about the cheating rumors. He again denied them, and after a lot of shouting, Ariana Madix finally said, "Raquel and James both said to me that when they moved in together, which was at the beginning of this summer, they considered that a fresh start and a new beginning for their relationship." She then reminded everyone that Raquel wasn't living in L.A. before that time.

Raquel, for her part, told host Andy Cohen that she didn't think James was completely faithful before they moved into together, but appears to have put it all behind her. "Some people don't get us and that's okay, you don't have to," she wrote on Instagram in May 2019. "But believe me when I say this guy is my biggest hype man and understands me better than anyone else."

Now, the two seem to be getting quite serious. Last June, Us Weekly asked James if he and Raquel would be the next Vanderpump couple to walk down the aisle. "Yeah, probably," the DJ responded. "You know, I don't like rushing that cause we're like 10 years younger than everyone else on the show, but I love her so much."

If wedding bells are in James and Raquel's future, hopefully they won't serve pasta at the reception.