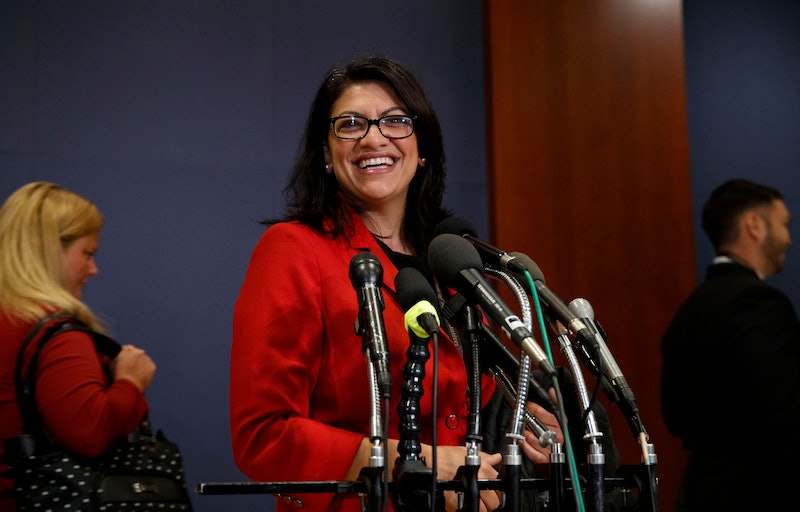 If President Donald Trump didn't know who Rashida Tlaib was before, he probably knows of her now. Hours after being sworn in as a member of the 116th Congress, Tlaib dropped the f-word while vowing to impeach Trump. While Tlaib's expletive-laced call for Trump's impeachment has quickly drawn criticism, the Michigan legislator is unapologetic.

"People love you. And you win," Tlaib said while speaking Thursday at an event sponsored by the progressive group MoveOn. "And when your son looks at you and says, 'Momma, look you won, bullies don’t win.' And I said, 'Baby, they don't,' because we're gonna go in there and we're gonna impeach the mother****er." Tlaib's comments were captured in a video shared on Twitter by Nestor Ruiz.

Yet, despite criticism for her choice of words, Michigan's congressional representative isn't backing away from them. "I will always speak truth to power," the newly-sworn in congresswoman tweeted Friday along with the hashtag #unapologeticallyMe.

"This is not just about Donald Trump. This is about all of us," Tlaib wrote in a second tweet posted minutes later. "In the face of this constitutional crisis, we must rise."

In a statement given to MSNBC, Tlaib's office said the congresswoman "was elected to shake up Washington, not continue the status quo" and that she stood by her call for impeachment. "The congresswoman absolutely believes he needs to be impeached," the statement said. "She ran and won by making this very clear to the voters in her district." Bustle has reached out to Tlaib's team for additional comment.

President Trump appeared to respond to Tlaib's call for impeachment Friday, when he tweeted, "How do you impeach a president who has won perhaps the greatest election of all time, done nothing wrong (no Collusion with Russia, it was the Dems that Colluded), had the most successful first two years of any president, and is the most popular Republican in party history 93%?"

Bustle has reached out to the White House for additional comment.

But Tlaib hasn't just called for Trump's impeachment at Thursday's MoveOn sponsored event. The congresswoman also pushed for impeachment proceedings in an op-ed published Thursday by the Detroit Free Press. "President Donald Trump is a direct and serious threat to our country," she wrote, alleging that the president "attacks our Constitution, our democracy, the rule of law, and the people who are in this country" on a near daily basis. "The Framers of the Constitution designed a remedy to address such a constitutional crisis: impeachment."

In fact, Tlaib has been an outspoken critic of Trump since his 2016 election and was once thrown out of a Trump campaign rally for protesting. According to Michigan Live, Tlaib was part of a group protest organized by the Michigan Peoples Campaign, Michigan United, and Moms Against Trump, which interrupted a Trump campaign rally at the Cobo Center in August 2016. At the time, Tlaib told the news outlet she was "disgusted" that Trump had taken an honorary Purple Heart from an elderly veteran.

Tlaib is likely to continue to push back on President Trump as a newly-sworn in member of the 116th Congress.