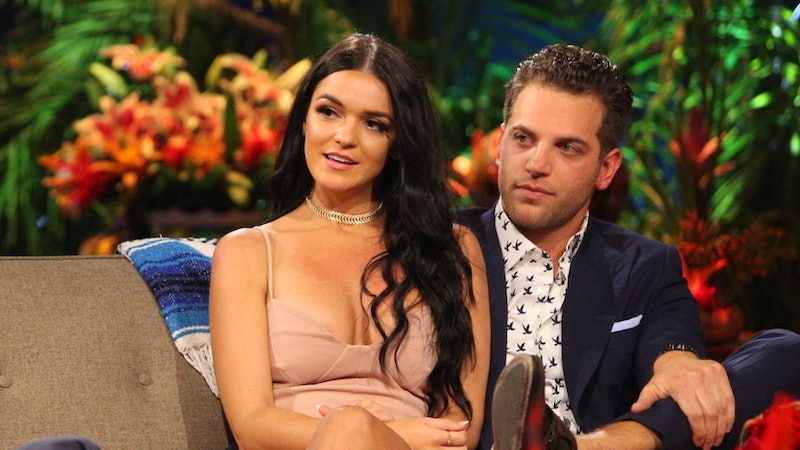 Almost two years after they met and fell in love on reality TV, this Bachelor in Paradise couple is planning to spend the rest of their lives together. It's official: Raven Gates and Adam Gottschalk are engaged, and they announced the good news on Sunday with some seriously gorgeous Instagram posts.

According to Raven's post — with a caption that included lyrics to Shania Twain's "Forever and For Always" — Adam popped the question on Friday, and it seems like they've been celebrating privately ever since. She didn't share any specific details about their engagement, but the photos, taken by Courtney Matthews, say it all.

It seems they were on a rooftop somewhere in Dallas, Texas, surrounded by white rose petals, with Raven wearing a black dress and Adam in a suit. But even better than that is their faces, which show that the moment was pure joy. Raven is grinning in every single one of them, and she seems to be wiping away tears as Adam got down on one knee.

And as far as the pictures show, it looks like Raven's ring is truly beautiful (and very sparkly). It's obvious how happy this couple is to be making this commitment, and it's definitely been a long time coming.

Adam shared even more photos in an Instagram post of his own, including one where he's jumping in the air to celebrate as Raven admires her ring.

And in case you were wondering, yes, plenty of members of Bachelor Nation have already commented on the photos, wishing this couple well. On Raven's post, Ashley Iaconetti, Arie Luyendyk Jr., and JoJo Fletcher all chimed in to congratulate them.

And that wasn't all — the comments continued to flow, with sweet messages from Chris Harrison, Wells Adams, and of course, Tia Booth, who has been friends with Raven since even before their Bachelor days.

It makes sense that Adam and Raven are taking these next steps towards their future together, since they've been together for so long, but many fans already knew that this moment was coming this year. When Adam and Raven were on Rose Buds: The Most Dramatic Podcast Ever back in February, he confirmed that they'd be engaged sometime in 2019, and now, that time has finally arrived.

"Sometime this year, in 2019, we will be engaged," Adam said, adding, "We want to take the right steps to do that. We love sharing our lives with everybody here, but we want to stay private in our own respective way."

Being that Adam and Raven kept their engagement to themselves for two days before sharing the news, it seems like they did find a way to do that — and now, fans can follow along as they continue to live happily ever after.

Congratulations to Raven and Adam. The Bachelor franchise doesn't always have the best success rate when it comes to contestants finding lasting love, but when those love stories do come along (like this one), it's worth it.