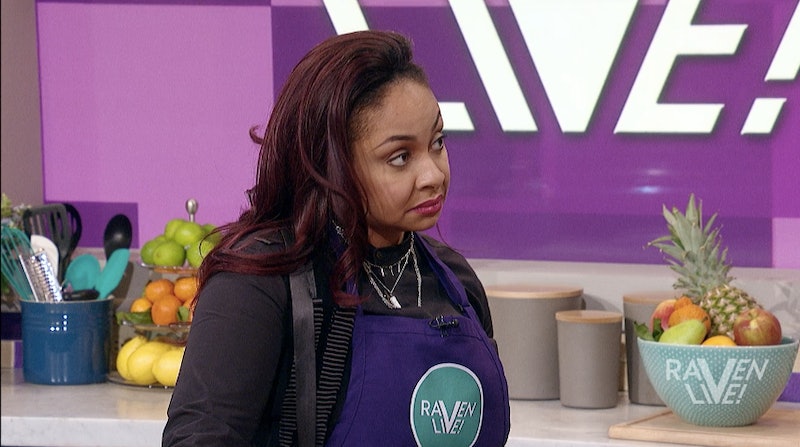 SPOILERS ahead for Master of None Season 2, which takes fans on quite a journey. Geographically, the second season takes Dev from Modena, Italy, to back in New York City, but the season finale reveals a startling fact about Dev's colleague that is rightfully addressed on Raven-Symoné's fictional talk show. Raven Live on Master of None shows that Raven-Symoné isn't afraid to get real about sexual harassment and neither is the show's millennial audience.

In the Season 2 finale titled "Buona Notte," Raven-Symoné makes a cameo in Master of None as the host of the fictional Raven Live. On the surface, Raven Live looks just like your typical daytime morning show, like Rachael Ray or The Chew. Right before Dev is set do to a cooking segment with his BFFs (Best Food Friends) co-host Chef Jeff (Bobby Cannavale), Dev's agent Shannon (Danielle Brooks) tells him that #ChefJeffIsAPerv is trending on Twitter, because many women are accusing Jeff of sexual harassment. Shannon encourages Dev to go on with the cooking segment as she tries to handle it and it's implied that they think the issue won't be brought up on Raven Live, since Dev and Jeff are there to promote their TV show. But that assumption is totally wrong.

In the first part of the Raven Live segment, Jeff cooks paella, while Dev tries to deftly distance himself from his colleague due to the accusations. During a commercial break during, viewers see Raven-Symoné learning about the Jeff accusations — and then she straight-up confronts him on-air. She doesn't resort to sitcom-ish passive aggression or side-step it, either. The Master of None Raven-Symoné reports the issue and approaches Jeff about in like a professional journalist.

"My producer talked to me during the break and told me some breaking news that I would be remiss if I didn't bring up right now," she says in the scene. "Jeff, I don't know if you know this, but as of now on the internet, there are at least 14 females accusing you of sexually inappropriate conduct." Raven-Symoné then asks Jeff for a response to the accusations, but he deflects, saying that he was only there to cook food. "This is a real issue I'm going to be talking about right now," Raven-Symoné tells him in the scene. "Did you think I was going to run from this? We don't run here at Raven Live. We talk about the issues here." Jeff continues to deflect and focus on the food as the audience boos him off the stage.

It's a refreshing scene, because it showed that even though millennials are often seen as silly and into superficial topics, there is a depth that lies underneath — even in a morning show aimed at the age group. Last year, Teen Vogue writer Lauren Duca famously told Tucker Carlson on his show Tucker Carlson Tonight that "a woman can love Ariana Grande and her thigh-high boots and still discuss politics,” which essentially sums up Raven Live and its portrayal of the millennial audience. Yes, millennials can care about online dating apps, the latest food trends, and serious issues like sexual harassment.

And if Raven Live existed on actual TV, it would definitely be a must-watch for millennials for that reason.