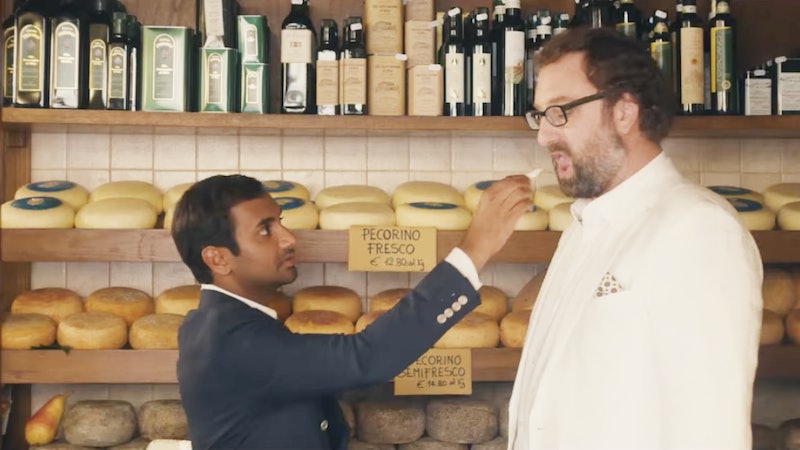 In the extended trailer, we see the actor failing for a fifth and sixth time at New York's casual dating scene, being serenaded (with piano accompaniment) by John Legend, and thoroughly enjoying his developing relationships with friends, and, perhaps, someone a little more intimate. The Jabbawockeez also seem to be making an appearance, and we even get to see Ansari and best friend (Eric Wareheim) practicing some masked moves of their own.

One thing's for sure: we've all been waiting to reunite with the diverse set of characters on the show that landmark addresses ageism, cultural barriers, gender-norms, and white male privilege. Master of None shook up media when it debuted back in 2015. I know I'll be tuning in and marathon watching just to see where Ansari can push the envelope to next. Watch the official trailer below, and don't forget to tune in to Netflix May 12 for its official debut.

More like this
'The Crown' Season 6 Has Suspended Filming "Out Of Respect" For The Queen's Death
By Bustle Staff
Olivia Colman Stars In First-Look Trailer For BBC's 'Great Expectations'
By Sabah Hussain and Sam Ramsden
Everything To Know About The 'Daisy Jones & The Six' TV Series
By Maxine Harrison and Brad Witter
'Succession' Season 4 Will Be An "Absolute Banger" According To Cousin Greg
By Bustle Staff
Get Even More From Bustle — Sign Up For The Newsletter
From hair trends to relationship advice, our daily newsletter has everything you need to sound like a person who’s on TikTok, even if you aren’t.