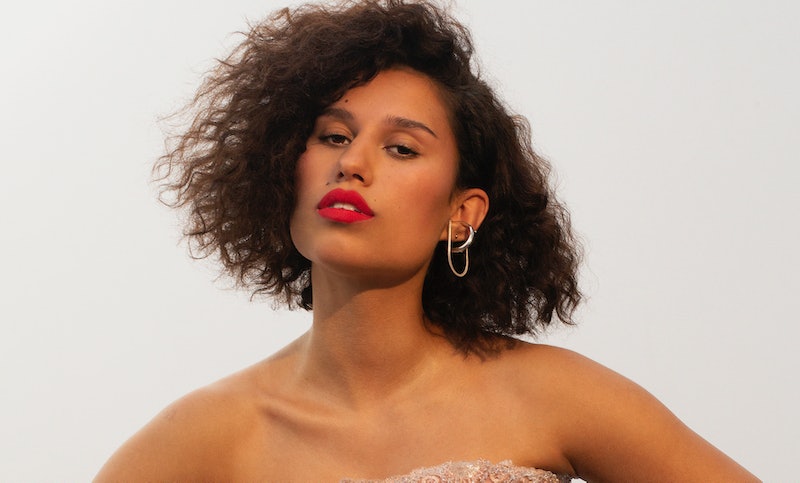 From the moment you hear the opening lines of Raye's brand new song “Please Don’t Touch Me” — "One touch I'm a victim. One look in your eyes, I'm in" — your know you're in for something different. While the melody may be upbeat, the lyrics in this track are raw and, at times, heartbreaking. Through them, Raye wants to convey the notion that owning your vulnerability is a form of power.

Speaking about the song's chorus, the singer tells me: "I feel at the moment, the sentence ‘Please don’t touch me if you don’t mean it’ is so the sentence that I carry with me and I have been for the last few months."

In the past, Raye’s brand of pop has felt feel good, but always with an edge (think “Decline”, “Love Me Again”, and “Confidence”). Now she appears to be leaning slightly into the darker side of things. "I’ve spent a lot of time writing wagging finger songs and trying to empower myself, which I love, and I love those songs," she says, "but actually the most powerful I can ever be is being strong at my lowest, my most naked and susceptible."

"The most powerful I can ever be is being strong at my lowest, my most naked and susceptible."

Speaking more about the message behind the song, Raye explains: “I’m vulnerable, I wear my heart on my sleeve, and I’m all or nothing. If we have a connection but you don’t want to act upon it, why make me suffer?”

The singer continues: “This 21st-century love mentality of being ice cold, everything’s a game, and there’s unwritten rules of love, I don’t have time for that and that’s really what the song is about.” I hear that.

Listening to Raye speak with such clarity on these topics, it’s easy to forget that she's just 22 years old. Growing up around music, she first learnt to sing in the church with her dad playing keys. She started attending the renowned BRIT school at 14 and released her first EP only a few years later. She came third on BBC's Sound Of 2017 and since then has gone on the collaborate with music giants like Stormzy, Jonas Blue, and David Guetta.

"I fell in love with [performing] very young," Raye tells me. "I was good at it and I enjoyed it thoroughly. When I have my sights set on something I’m very focused and determined." While her musical education definitely helped shape the artist she is today, Raye tells me that London is "a massive part of who [she is] as a human being." She says: "I do a lot of traveling and I think you can tell if someone is a Londoner. We have a way of communicating and a boldness similar to New York I like having that down to earth-ness in a lyric, I think that’s important. You’re getting a London girl's perspective every time you hear a Raye song."

"You’re getting a London girl's perspective every time you hear a Raye song."

Authenticity is a buzzword in the music industry right now, but there's a realness to Raye that radiates off both her and her music. It's something she's aware of, and constantly looking to preserve, the artist tells me, especially when she's collaborates with other musicians. "I can’t fake something. I can’t go into the studio with you if the vibe’s weird, and see it through. I’ll just leave, it’s not genuine. That’s what I search for in an industry where so much is real but then so much isn’t," she says.

However, collaborating is still one of Raye's favourite things about working in music, especially when it means she gets to hang out with women she admires. "I really feel now more than ever, girls are genuinely starting to love each other in the industry. It’s not for the gram or for the hell of it," she says, "it’s about getting together with my girl artists and hanging out and catching up and not posting that we’re together on social media."

Raye's commitment to make other women feel good translates clearly into her music. Although she makes music for everyone, Raye tells me, “I think subconsciously a lot of what I do is for women. I adore men but I worship women.”

“I adore men but I worship women.”

With “Please Don’t Touch Me” being released on Dec. 13, just in time for Christmas, the New Year is looking pretty spectacular for Raye. "I think I’ve spent most of 2019 preparing to release music in 2020," she says. Looking to the future, she explains: "I want to tour, fingers crossed, and I’m just excited to put out music I love. That’s my main priority." Listening to it will be mine.